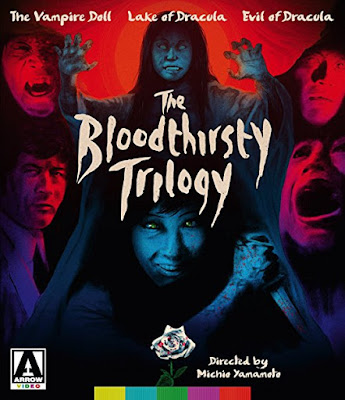 Japanese horror films have always fascinated me since Ju-On haunted my life for about a year when I was around 16 years old. Enough so that, when available, I try to snag a few here and there to fit them into my viewing schedule. When Arrow Video announced The Bloodthirsty Trilogy, comprising of The Vampire Doll, Lake of Dracula, and Evil of Dracula, for a new Blu Ray set, I was stoked. These were films that I was rather unfamiliar with and after hearing that they were essentially Japan’s brief attempts at replicating the Hammer horror style, I was completely bought in. Eventually, we started receiving quite a few requests at Blood Brothers to review the set and with the new Blu Ray in hand, I’m happy to oblige. Below you will find each film reviewed singularly, in order as they appear on the set, and after that there will be a recap of the films and the actual release itself. If you’re already interested in the set, I might recommend that you just go ahead and make the purchase, supporting these kinds of releases only means that we get more of them in the future, but if you’re still wary of whether or not the films are worth it, just crack open your coffin and keep reading about each of the films. 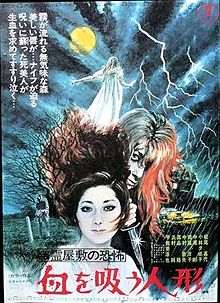 What’s most fascinating about this first part of The Bloodthirsty Trilogy, which is known under a slew of different titles but for the sake of this review it will be referred to as The Vampire Doll, is not that the film attempts to recreate the Hammer style of horror that was mentioned above, but that the film is so impeccably trimmed of any kind of inefficiencies. Running at a very brisk 71 minutes, The Vampire Doll sacrifices the time needed to be spent on character or plot development and simply cuts it out for the sake of a sprinting pace. This leaves a film that very much entertains, but one that feels a bit hollow and opaque in terms of substance. The plotting itself is interesting, particularly in how the story even feels more European than expected, but it does run thin as the tension is lost on characters that the audience is not quite invested in and various plot reveals in the third act that come out of the blue because the film hasn’t spent enough time to develop the leads.

Granted, The Vampire Doll is quite entertaining. The visuals are sharp, made sharper by the new restoration available on The Bloodthirsty Trilogy Blu Ray from Arrow Video, and there are a few great moments of horror that work. The use of the vampire herself, with gleaming gold eyes and a cold bluish white hue to her flesh, makes for a stark contrast to the warm and complex sets of the house where most of the film resides. The splashes of bright red blood again replicate the Hammer look as director Michio Yamamoto handles the use of shadow and visuals well, giving it that European flair. For fans of the Hammer classics or ones looking for a change of pace to the usual Japanese horror classics like Onibaba and Kwaidan that are available, then it comes highly recommended even if the thin story and narrative leave quite a bit to be desired. 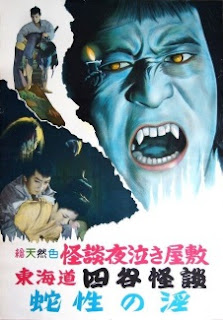 Although it is labeled as a trilogy, keep in mind that none of the films included in The Bloodthirsty Trilogy are ‘technically’ related. Stylistically though, the second film of this set, Lake of Dracula, is very much in the same body of water as a European flavored gothic vampire flick done with just enough of a Japanese angle to make it feel like its own thing. This time around, a young woman, her sister, and her doctor boyfriend are heading to her small hometown on the edge of a massive lake when a mysterious package arrives. Naturally, some bodies start turning up drained of blood and a brief memory from her childhood leads the protagonists back to a creepy old house by the lake. The Hammer influenced style is not only a visual approach to this one, but it’s relevant to the story which is somewhat refreshing. Lake of Dracula is not nearly as enamored with recreating the gothic tones in complete and the blend of the gothic tones with a more modern vampire film comes off as a bit more interesting without losing some of the fantastic visuals (again, the vampires with the golden eyes and bluish white skin tones works impressively) even if some of the atmosphere and tension is lost in the process.

Even though the film tries to add more depth to the characters than the previous, thanks to some handy hypnosis and a thinly utilized potential love triangle with a bit of sibling rivalry, Lake of Dracula tends to hit a lot of the cliché elements of its plot and narrative pretty hard. Fortunately, most of the performances seem heartfelt which add to the entertainment of the film and the main villainous vampire is delivered with some fantastic charm. When needed, the special effects are solid and director Yamamoto knows how to deliver when needed. While, like the first one, Lake of Dracula is mixed in its results, the film has enough pizzazz and spirited fun with its concept to be very entertaining. 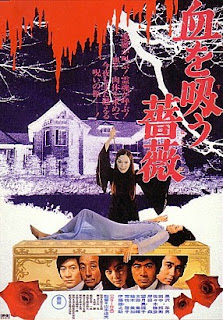 With two films down in The Bloodthirsty Trilogy, there were some general expectations that I had going into the third – and still unrelated continuity-wise, Evil of Dracula. Like the previous two, this film sees itself as a recreation of the gothic tones and visual elements of a Hammer film. At this point, that’s obvious if you’ve read through most of this piece and like the previous film, Lake of Dracula, Evil is even less concerned with the gothic atmosphere and tension as much as delivering a piece of westernized horror entertainment. The results are still mixed, but director Michio Yamamoto has a knack for some great visuals and keeping a brisk pacing so that the film never drags on while it delivers more vampire action than the previous two entries combined – even if it is missing one of the cool aspects of the previous films, the gold vampire eyes. The performances are solid enough, as with all of the films it could use a bit more character development, and the execution is generally impressive beyond that to give it some artistry.

Evil of Dracula sets itself apart though by being the most exploitative of the three films. Not only does it have more extensive vampire sequences overall, the film uses its concept, a man who is hired to be the new psychology teacher at an all-girls school, to deliver plenty of thrills and kills. There’s a decent sized body count, an intense ritual sequence, and the film gets in some nudity since I guess the main vampire isn’t so found of necks as he is for other body parts on the young women of the school. It’s not a full-blown exploitation film that Japan would be known for later on in the 70s, but those elements are embedded into the surface levels of this one and it makes it, for better or worse, stand out from the rest. Evil of Dracula might be the most fun of the three for these reasons, even if it does come off as a tad cliché by todays standards.

As it might be clear at this point, The Bloodthirsty Trilogy is a very entertaining and unique set of films that cult cinema fans and those looking for something a bit different than the usual horror film will want for their collections. All of the films do have their ups and downs of quality, usually in smaller and more nuanced ways from other another, and the overall quality of the films is in the ‘good, but not great’ realm of cinema, but it’s also hard not to enjoy them for what they are as films too. Director Yamamoto has a knack for great visuals and pacing, but the scripts as spotty at best. The Blu Ray does come with a new video essay by Kim Newman and the always reliable and informative Jasper Sharp adds a lot of detail with his written booklet on the films that’s included in the package (his work with Arrow is always a favorite of mine,) so there are a couple of special features that will keep cinephiles happy too to go with the new HD versions of the films. In the end though, with three films in the set and the unique aspects of their style, The Bloodthirsty Trilogy is a worthy addition, fun and entertaining.