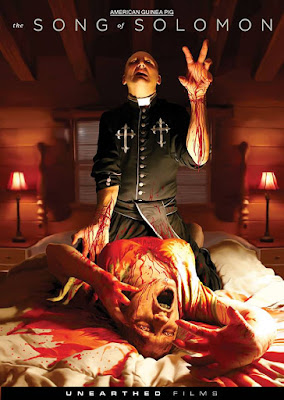 There was one key thing that I missed before sitting down to watch The Song of Solomon the other evening for this review. Despite the fact that the box art does not say it anywhere on it, The Song of Solomon is also known as American Guinea Pig: The Song of Solomon. What does this have to do with anything, some might be asking. Well, if you know what the Guinea Pig series of Japanese exploitation films is, then you absolutely know what to expect from the film. You expect it to push the limits of its exploitative nature and do its damnedest to make its audience gag with its content and realistic special effects. However, I did not know this until after the film ended. What I expected was another hum-drum exorcism film. What I got was a rip-roaring gore fest, loosely tied together with a thinly guised plot, and enough in-your-face exploitation violence to make die hard horror fans feel light headed. To say that I was taken back might be an understatement. This film has all of the subtlety of a of an 18-wheeler barreling down the interstate with the gas petal stuck to the floor while the horn remains blaring. Truthfully, that’s a compliment. The Song of Solomon, for all of its issues, accomplishes what it intends to do with little regard on whether or not the audience has the will power (or gag reflex) to keep up.

The core idea of The Song of Solomon is simple. Girl gets possessed by some demon, a series of priests try to exorcise her, and a series of horrific and violent events happen to everyone. It’s not rocket science. Even when the film attempts to add its own little twist to the proceedings in the third act and throws in a bit of character development for the three priests that are summoned to help out, most of it is pretty thinly drawn. It’s just enough to keep the audience intrigued by the clashes of God fearing men and this poor possessed girl. There are some fun ideas at play in these smaller tidbits, particularly in how the three priests are hardly perfect human beings, but it is very obvious that The Song of Solomon has no intention of making any kind of truly effective dramatic and thought-provoking classical style cinema.

What the film does well is that it delivers on its exploitative and shocking violence and gore. Director and writer Stephen Biro has a firm grasp on what makes things horrifying, opening the film up with an intriguing and tense monologue from a desperate man and then taking just enough time to establish the characters and idea before launching into a tirade of blood soaked evil and impressive special effects. The opening death sequence, which is horrific in its own, is only a ‘taste’ of what is to come later. Each of the horror sequences, spurred on by a fully devoted and toe curling performance from Jessica Cameron as the possessed young woman, continually ups the shock factor leaving a finale that is sheer insanity fully expressed onscreen. While some of the performances can leave a bit to be desired, visually the film is unrepentant in delivering on its promises of hell. The effects are impressively executed and by the time that the third priest pulls himself by his boot straps to take on this demon, I was just waiting to see just how far this film was willing to take it – of which it never hesitates to go the distance.

At this point, I would like to mention that whether it was intentional or not, The Song of Solomon has a very strange and effective knack at being very bleakly humorous. The film is presented in a very, very serious manner. Each character is presented with a matter of fact intensity, but there are these small moments that are blissfully self-aware and impeccably executed dry humor. Whether its how the mother remarks at one point ‘More priests?!’ when a new one shows up or how there is a nurse that is briefly mentioned only to show up for approximately 15 seconds before being horrifically dispatched, this film has a strange knack for knocking it out of the park when it comes to the sly dark, humor.

The Song of Solomon is not a film for the faint of heart nor is it a film that people who judge all films on a more traditional critic viewpoint will find themselves enjoying, but it’s a film that sets out to make a statement and does it with the cataclysmic ferocity that it shows on screen. There are plenty of things that could have made it a stronger film overall, including more defined characters or reinforcing the message of the finale, but for what it is The Song of Solomon is true to its original title as a modern piece of exploitation. Gore hounds, exploitation junkies, and those who enjoy the special effects craftsmanship of horror will immediately want to pick up this film to watch. It’s a bloodbath of thoroughly and exploitatively enjoyable proportions.