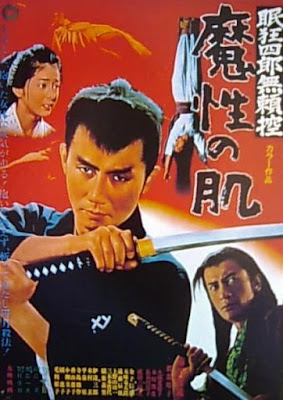 One of the things that keeps rising to my attention, at least while I am working my way through the rest of the Sleepy Eyes of Death series, is that often my opinion of individual films goes against the popular one. I found that Sleepy Eyes of Death 8 was surprisingly effective and cinematic, despite it being one that was generally unpopular with fans, and for the ninth entry, A Trail of Traps, my opinion once again swung the opposite direction.  Where fans tend to find this one massively entertaining and above the usual quality of the series, as the film rolled to a close, there was a feeling that the potential of the concept did not equal the film that was delivered. Despite some fantastic moments, a strong visual approach by director Kazuo Ikehiro, and another set of really strong performances from the cast, A Trail of Traps is a film where the meandering script has no real sense of purpose and seemingly strings together a half dozen plot threads in an attempt to layer a film that doesn't have the nuance and momentum to make it work. It is entertaining, for sure, but the fun concept isn’t enough to keep the film from floating off on its own trail of narrative traps.

With a title like A Trail of Traps, one would hope that this ninth film in the series would be highly entertaining. In those regards, the film is very much a success. Not only are the film’s villains, a rogue Satanic cult (sort of?) known by their symbolic black pinky fingernail, deliriously outlandish and memorable, but their dedication to setting up traps, running spies, and generally just being a huge pain in the ass makes for a very over the top evil organization to cross swords with our hero, Kyoshiro. Most of the second act, leading into the momentum of the third act, is populated with Ichikawa’s hero attempting to dodge traps and uncover the mystery behind a potentially long-lost sister while helping a government official deliver a golden statue to its destination. The traps are action-packed and often quite gimmicky, from gambling with loaded dice to rolling logs, so if there is one thing that A Trail of Traps does succeed in it is creating a fun and very action-packed series of events, making this film the most action oriented one of the series thus far.

Beyond those gimmicks though, A Trail of Traps throws a ton of narrative pieces at the audience and hopes that some of it sticks with little effort in regards of pulling off any kind of true emotional semblance of heart or depth. The entire plot piece of a statue being delivered is reason enough for the film to exist, building on some of the intriguing Christian plot devices and character elements and then injecting them with enough cheese that Wisconsin might be jealous. Yet, the more interesting plot device is a mysterious sister that Kyoshiro is made aware of and how he approaches that information. This is where the film really falters because it’s a narrative device that exists simply as motivation for the character and doesn’t add any effective depth to the character or story. While the character has shown some wishy-washy traits towards women throughout the series thus far, this threading could have been interesting to watch unfold and yet it feels just as unfocused and thinly executed as the rest of the script.

In terms of the franchise, it is easy to see why fans have a soft spot for Sleepy Eyes of Death 9: A Trail of Traps. The film is very entertaining, showcasing one of the more cynical and torn versions of Kyoshiro, and the series of traps makes for some righteous cinematic fun. It was hard to invest in anything that the film throws at the audience though because the plotting is thin and the narrative has a patched together tone that never allows any real emotional beat or thematic sequence to resonate beyond a surface level. On top of that, it has has one of the strangest choices for a score in the series thus far. This opinion of the film does seem to be in the minority, but it is one that was hard to shake no matter how much I tried to enjoy the film.

Here’s to hoping that the tenth entry teeters the opposite direction like this film did with its predecessor. A Trail of Traps is recommended for fans of the series and those looking for a more episodic and entertaining entry.