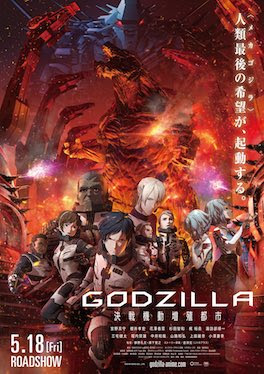 As a huge Godzilla fan, it was a shock that I felt so disconnected and disappointed with the first anime film Godzilla: Planet of the Monsters. If you’re curious about those feelings, as they do set up the context for this next review, I would suggest just going and reading my review for the film HERE. In summary, the film went very far away from the usual core Godzilla material and was essentially crippled by its structure. While its sequel, or more fittingly it should be called next episode, Godzilla: City on the Edge of Battle does help the first film by actually adding some character depth to the story, but it’s also a film that inherently suffers from the same problems and only adds a few redeeming qualities to make for a better film experience. Fans of the first film will definitely love what City on the Edge of Battle is offering, but for those hoping for a lot more (i.e. me) it’s only slightly better than the first.

If you had watched the first one, then you would know that it essentially ended on a cliffhanger and it might as well have dropped a “to be continued…” card right before the credits. The intention to make multiple films immediately allows the series to create elongated plot points and character arcs, but in terms of individual films they suffer from the structure. City on the Edge of Battle is no different. With no real recap of the events of the first film, outside of some references in the dialogue, this one immediately picks up from where Planet of the Monsters left off. The film still has a huge problem with exposition and feels the need to vomit out unnecessary amounts of detail to explain its ridiculous concepts and plot progressions. Teases for Mechagodzilla in the first film are weirdly interpreted in the film as the nanometal used to start its creation thousands of years ago has taken a life of its own (?) and it has created a living city (?!) that plays parallel to the indigenous people that our heroic anti-Godzilla team discover are living in the area. There are some interesting ideas at play here, but the film often spends so much time trying to convince us WHY its important with endless and rather derivative exposition that it almost all seems moot – at least narratively speaking, and it forgets to MAKE anything feel important.

To its benefit, since most of the initial premise and set up for the world building has been done, City on the Edge of Battle gets to focus more on the character development side of things and the shrinking of the cast helps immensely with this side. Granted, take all of that with a grain of salt since the ratio of character building to exposition still greatly leans to the latter, but it was nice to see some actual character interactions and development that wasn’t necessary for the plot get some development. This is benefitted by some decent voice acting and a film that takes some brief moments in its epic story to let emotions resonate, particularly in the latter half.

Also, where Planet of the Monsters only had a tease within the Godzilla universe of Mechagodzilla (which weirdly does not pan out in this one as we never see a Mechagodzilla – just the living city that was born out its carcass or whatever,) City on the Edge of Battle does attempt to add some new elements and interpretations of things from the usual Godzilla-verse into the film. The indigenous people on Earth are lead by twin young women who talk about their God briefly (a reference to Mothra) and there is a moment where one of the alien people on the team talks about how an unnamed monster arrived on their home planet and destroyed it, which I assume is a reference to the origins of King Ghidorah since he was a space monster in the original series. This does get me rather excited to see how the series does interpret them for upcoming films, but considering how much of a letdown Mechagodzilla was for this film, perhaps no one should get their hopes up.

The execution of City on the Edge of Battle is mixed at best. The animation seems spotty at times. Although it is stylistic, the choice for angular looks and desaturated color schemes makes it feel bland. The gray tones still don’t inspire a lot of fun to be had with the visuals and the bursts of orange and purple in the finale still seem like a desperate attempt to create some dynamics. As mentioned, the voice acting seems solid enough, but it’s not enough to really carry the film. Not execution wise anyway.

Godzilla: City on the Edge of Battle is a slight improvement over its predecessor, most particularly in that the film takes some time to develop its characters a bit further and has the knack of adding in more Godzilla universe aspects, but the rest of the film is still massively disappointing. It’s still bogged down by excessive exposition, the visual style is bland and uninteresting, and the lacking use of Mechagodzilla left a sour note after the tease in the first film. To add salt into the wound (again,) the film leaves it wide open for the next entry (again.) It ends on another cliffhanger that will, assumingly, be answered in a third film.

Which means there is at least one more of these films to work through.