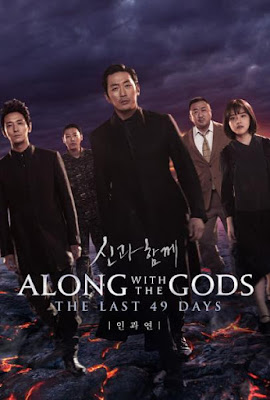 Late last year, South Korea released Along with the Gods: The Two Worlds throughout the world and it was met, generally, with solid praise. It was a raucous cinematic ride, blending genres almost willy-nilly into a provocatively entertaining experience that was equal parts morality tale, fantasy adventure, and franchise starter. It’s this last element of The Two Worlds that brings us to its (first?) sequel, Along with the Gods: The Last 49 Days. After the original film left off on an open ending meant to tease that the three guardians would continue their plight, it was only expected that a follow up film was imminent and, surprise, surprise, here we are less than a year later with the next one. Sporting the same genre bending style and outlandish popcorn entertainment meets message film, fans of the first one are definitely going to want to leap back into the world of afterlife trials and fantasy adventure. Granted, this sequel doesn’t quite find the effective balance of the first, it does have its own brilliant moments leaving The Last 49 Days as grand cinematic entertainment with a heart of gold.

Following right where the first film left off, The Last 49 Days once again follows our three charming guardians as they attempt to get another paragon through the trials of the afterlife and to his reincarnation. It builds on the secondary plot of the first film, where a soldier is accidentally shot and mistakenly buried alive by his friends. This time, however, the King of the underworld tasks our heroes to also ascend an elderly gentleman which will prove to be far more difficult since there is a house God, played by the always phenomenal Ma Dong-seok, who refuses to let him go. Problems arise, lessons are learned, but will the three guardians be able to accomplish both tasks in the next 49 days to be reincarnated themselves?

The reason that I wanted to go over the main narrative and plot structure of The Last 49 Days because it represents both the best and most problematic elements of the film. The first film occasionally ran into speed bumps in adding the secondary plot that feeds into this film, but it managed to keep its pacing well enough. The Last 49 Days, in continuing to try and establish the franchise ambitiously, runs into the same problems. Our three guardians are split up almost immediately to maintain the dual plot structure and the film feels like it’s two films jammed into one run time. Each plot has its own protagonist and series of progressions, but the first plot is far more fantasy driven (featuring the fallen soldier) and the other part features more grounded socio-political motives (featuring the house God, the old man, and his grandson). The weaving between them occurs mostly through flashbacks to the guardian’s previous lives and how the guardians came to be assigned to one another, which in turn almost feels like a third plot line that’s meant to create an emotional foundation for the other two. Sounds like a lot? It sure as hell is and The Last 49 Days sacrifices some of its impact to create the ambitious world and character building for its audience.

As much as that entire point could entirely derail a film, The Last 49 Days is once again executed with enough emotional resonance and charming fun that even when it struggles to find its footing and momentum, it never ceases to entertain. There are entire sequences that are seemingly there for the sake of spectacle, including one where our soldier is meant to face the things he fears and it takes a surprising turn for the random, but the film handles it relatively well using its fantasy elements to create plenty of popcorn munching fun. Once again, the performances are impressively spot on and the increased character development for the three guardians adds a lot of heartfelt and dramatic dynamics to the film. The addition of the previously mentioned Ma Dong-seok is just icing on the cake as he once again proves why he is easily one of the most impressive actors working in the world. His role is a welcome piece to The Last 49 Days and South Korean cinema fans will love him even more by the time the film is done. Partner all of this with some strong action sequences and a popping sense of visuals from director Kim Yong-hwa and the execution of the film easily overcomes many of the plotting problems that arise.

Like the first film, Along with the Gods: The Last 49 Days is able to effectively hit a lot of genres and tones in its robust run time. Not since The Two Worlds have I been moved to tears, laugh, and scratch my perplexed head so quickly and so often during one film. The Last 49 Days is massively ambitious and fantastically entertaining, following up the first film with enough vigor and fun to carry on the franchise nicely. It is, ultimately, a step down thanks to that ambitiousness in its storytelling, but fans of wild film making will want to jump into the world of The Last 49 Days.

Written By Matt Reifschneider
Posted by DarkReif at 10:22 AM