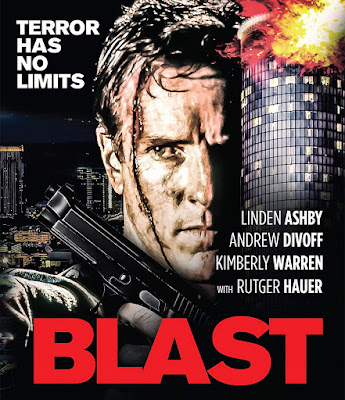 The success of Die Hard left a tidal wave of knock offs and various action films that attempted to recreate the iconic film’s brilliance. As with most big cultural films, this is a trend that happens. Some of these replications were effective in their own ways, films like Speed or Sudden Death stand out as fun spins on the premise, and some of them, sadly, were not. In the latter category, we have films like Blast. While Blast is definitely influenced by Die Hard, it’s not the replication to the extent that the cover would indicate. Blast uses the basic concepts about terrorists and a one-man battle against them in a sealed off building, but the lacking sense of humor and a very dry and serious approach to the material does not necessarily do the film any favors. It hits a lot of the right ideas in the formulaic approach (and it does have moments of B-grade action awesomeness,) but ultimately Blast tries too hard to be too dramatic to effectively entertain.

The film starts off on an odd note. It uses some written material to set up why terrorists would want to attack a training facility of the Olympic games in Atlanta (which, if you remember, there was an actual terrorist attack in Atlanta during the games) and it sets up a somewhat very, very serious tone. This tone is then carried through the rest of film, even when it starts to tread into B-action movie areas, and it tends to play at odds with the material in the film. Not only is the choice to approach the material in a very serious manner problematic to the entertaining aspects of the film, but opening the film with a general reference to the real-life attacks does seem like a poor choice and kicks the film off on a strange feeling. This is somewhat nitpicky, but it did leave a lingering feeling throughout the rest of the film that felt like it should be mentioned.

Once that has passed, Blast does hit the formula for the Die Hard inspired action movie hard. Our hero is introduced as a man hitting the bottom hard and now he works as a janitor, despite being an Olympic athlete at one point (in martial arts, nonetheless, cause I’m sure those won’t come in handy later,) and his wife is helping train the Olympic swimmers at the stadium he happens to be cleaning. Terrorists show up, shit goes haywire, he ends up helping some of the cops on the outside, blah blah blah, welcome to the party, pal. The problem remains, outside of the ultra-serious tone mentioned above, is that Blast is very generic. Linden Ashby is a generally charming actor, as seen in the original Mortal Kombat with quality aside, but the manner that director Albert Pyun directs the film attempts to strip all of that from him…and every other character. They all feel like broad stroke characters, set in a predictable action film set up, and the film doesn’t quite know how to make the chemistry work. Granted, there are moments where one can see the cheesy side of the director within smaller pieces of this film – let’s just say that Rutger Hauer plays a handicapped Native American terrorist specialist who is shrouded in shadow until a very strange sequence in the third act, but there is far too little of that to get all that excited. It’s as if the film intentionally plays against all of the things one wants from it, which makes it pretty disappointing.

Action wise, Blast does hold up decently. It doesn’t quite have the huge set pieces one would hope from a film where terrorists hide bombs around an Olympic stadium and carry around significant weaponry, but it does the job admirably when needed. This is where Ashby gets to strut his stuff a bit, since he does seem rather unassuming in his screen presence and gets to whip out some great hand to hand combat and some fun gun fights. Truthfully, Blast takes far too long to get him involved, letting him mope around for damn near half of the film before sending him high kicking into some baddies, but by the time he does it is a welcome relief from the melodramatic material that is being spoon fed to the audience.

MVD Marquee scheduled Blast as one of their first releases for the new arm of the distribution label and it’s not necessarily one of their best. The film itself is lackluster at best and outside of some great cult cinema casting (Ashby, Hauer, Tim Thomerson) and the rather legendary B-action status of director Albert Pyun, there is only a handful of collectors out there that are going to feel the need to have this in their collection. For those folks, it comes recommended to perhaps fill that empty slot in a few collections, but for the rest the film itself is hard to recommend, even though MVD Marquee gives it their best for this new Blu Ray release.

Written By Matt Reifschneider
Posted by DarkReif at 10:55 PM