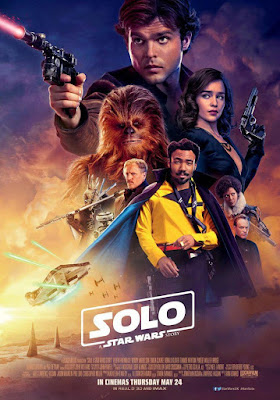 When the latest Star Wars entry was announced to be a prequel featuring a young Han Solo doing his space smuggler thing, I will admit I was less than thrilled. Disney and the LucasFilms machine has an entire universe to explore and they decided to go the safe route with a character that we already know and have already spent four films with in some regard. Yawn. The following behind the scenes drama for the film, featuring Lord and Miller being booted from the film after shooting a significant amount of it and rumors of a shoot that was PLAGUED with issues, certainly didn’t inspire a lot of hope in the product. Even the hiring of megastar director Ron Howard to fix the film seemed hollow, particularly since most of his recent output never connected with me. To say that I was going in with some pretty low expectations is an understatement. Perhaps this is why, even though the film is, indeed, very, very flawed, I was pleasantly surprised with Solo: A Star Wars Story (ugh, that title still sticks in my craw.) Ultimately, Solo is a fun film with enough entertaining elements to pass off as a decent early blockbuster for the year. It’s hardly one of the best from Star Wars, easily the worst of the Disney era for a variety of reasons that I will go into here in a second, but it’s fun and it’s an inoffensive piece of cinema that works as the popcorn flick it is. Did I want more? Sure, but I was not expecting to get it.

The one thing that truly did seem to be exciting in the initial reports and build for Solo is that the film would focus on being a ‘space western.’ I’m all about that. Fortunately, that’s something that the film does well. Right from the beginning, as it shows a young Solo running as a thief in the dense city, the film starts laying the groundwork and plot/narrative formula of a western. Sequences occur in gambling dens, there is an extensive train heist, and there is even the set up for a duel in a sandy location. Ron Howard creates a kind of rugged swashbuckling film where there is a mining camp rebellion and a gang of outlaws caught between the law and the larger and more vicious organized crime. Truthfully, this makes the film fun. Howard embraces this tone, delivers plenty of excitement and humor along the way, and lifts up the massively colorful cast of characters. There are moments where one can see just how impressive this film is and that includes the snowy train robbery that highlights the blockbuster.

The problem that remains with Solo is that, despite how much fun the film is obviously having, it succumbs to two major problems that come with a prequel. The first is that the film has no real sense of danger or consequence to its events. Most of the major characters are characters that we see later on in the series so we know that there really is no danger there and even though the film tries to add a sense of “any character can die!” by taking out some of the secondary characters quickly in the first act, there is never a sense that they really matter in the end and most of the larger emotional moments fall flat, particularly in the third act. The second problem is that, because it’s a prequel, it feels like the film is checking off a list for fans. Oh look, this is how he meets Chewie! Oh man, look it’s him gambling with Lando for the Millenium Falcon! Holy cow, who would have expected they would somehow put in the Kessell Run! This inherently isn’t the problem, Disney wanted to give Star Wars fans the things they want, but there is a big part of the film that desperately wanted to twist things in a new way. Outside of a few moments (two of them in the final act that certainly came as a pleasant surprise, including a final standoff and a surprise cameo), the film plays it remarkably safe. Fans will see what they want, but for a prequel to have meaning they needed to figure out a way to make it work in some surprising ways which is not what happens most of the time.

Now that we’ve covered the fun and the bad, there is one other aspect of Solo that needs to be addressed: the casting. Disney is known for their impeccable casting choices for their films even when it seems out of left field and for the most part, Solo succeeds in this manner. Donald Glover oozes charisma, Emilia Clarke serves well as the romantic love interest, Woody Harrelson steals a good portion of his scenes as he always does, and an intense and powerful villain for Paul Bettany is horrifically underused because he sucks the air out of the room with his work. Yet, Alden Ehrenreich struggles in the film. There are these key moments where one can see him settle into the character nicely, moments where he sparks, but never does it feel consistent. Part of this is not him, but it’s the film’s desire to have Han be Han for the entire film. Instead of seeing him become the cocky smuggler that we see him as in A New Hope, where he goes through growth as a character, it’s obvious that the film wanted him to be as Han as Han can be immediately. It doesn’t work. Add onto that the Ehrenreich struggles to settle in and develop the intense chemistry needed and it seems massively problematic. Granted, the secondary cast does a very, very impressive job in trying to carry the film from there, but it’s hard to overlook the issues that arise in this area.

In the end though, despite some massive issues in the foundational elements, Solo: A Star Wars Story is entertaining enough, charming enough, and fun enough to pass as a decent film. Considering how terrible it sounded, partnered with the awful setbacks in production, this easily could have been worse than the train wreck that highlights the film. It has some major problems that certainly distract from its better qualities, making it the worst Star Wars film from the Disney era, but it’s serviceable enough. Fans will more than likely enjoy it for what it is as a space western set in the Star Wars universe. Just don’t expect much more than that.