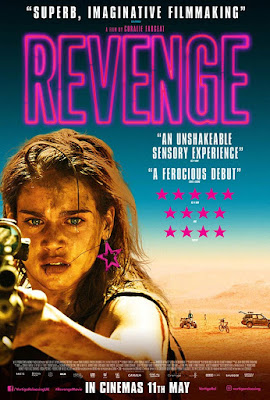 There is a current movement in horror, among some of the younger directors particularly, that sees the exploitation films of the past as a leaping point to create a new sense of artistry. The directing combo of Cattet and Forzani are breathing new life into giallo, for example, and now there is a new name on the scene making her mark: Coralie Fargeat. With her debut feature length film, Revenge, Fargeat is out to modernize – in an artful manner – the rape n’ revenge flick. Seeing as the genre has seen its fair share of terrible films to balance out the more impressive ones like Ms. 45 or the original I Spit on Your Grave, this is a welcome movement. Rest assured, Revenge is a BEAST of a film. Salaciously stylish, horrifyingly uncomfortable, and unafraid to embrace its exploitation roots with an artistic flair for the modern. It will make you squirm, gasp, cover your eyes, gag, cheer, and white knuckle the arm rest on your chair. Not only is it an effective film to bring the sub-genre back, it most certainly brings it back with a wicked vengeance that allows it to overcome its own flaws.

For those more experienced in the realms of cult film, the stylistic choices and approaches will instantly be recognizable. The pulsating synthesizer score, the bright washes of color, and the occasionally odd piece of problematic plotting (including some odd moments like how a shotgun can hit someone from long distance or how our heroine escapes from being impaled on a tree) are all more fitting for a film from decades in the past. Yet, Fargeat, who writes and directs, spins this in a modern way to create a film that is dripping style and effectively uses it to create its own sense of world building. Revenge loves to use contrasting elements in the style to keep its audience on edge too with its color schemes, sound design, and sense of building tension and dread to the visuals. At least on the surface, the film is a massive success in taking older styles and spinning them in modern ways.

As mentioned though, reclaiming older genres and style is not a fully unusual thing. Revenge, on the other hand, is not simply all style with no substance. Even when the film is embracing its exploitative content, it is using it create impactful characters and drive home its message. Like the great rape n’ revenge films that came before, Revenge uses its narrative and story for its own social message – particularly that of a more modern feminist slant. There is a ton of symbolism to be explored here, from the manner that our heroine is killed, to the meaning of the three antagonists as the different elements of power held above women, or the entirety of the third act and how she is able to garner the upper hand, but Revenge does a remarkable job of integrating it into a shockingly violent classic revenge powered narrative. This aspect of the film gives it so much more depth than expected and it is what is going to lift Revenge straight up onto the list of greatest films of the genre.

Granted, Revenge is not a film for everyone. Like other films from the genre, it is meant to be abrasive at times, particularly in how it uses its first act to develop its heroine and her antagonists, and it will leave you feeling a bit hollow. However, that’s par for the course in dragging the audience down and making them completely uncomfortable so that their journey along with her rise to power (and creating an iconic character with scars, pink star earrings, bare feet, and shotgun shells) is as large as it can get. It also allows the film to justify the insane amount of violence. If the content of its opening act does make you feel queasy, then there are definitely some moments later on of gore and shock that will certainly make you wince and avert your eyes. As a teaser, let’s just say the glass in the foot sequence of Die Hard has nothing on one moment in this film. Nonetheless, Revenge is a film that will make you feel a lot of uncomfortable emotions and as a part of the genre, I wouldn’t expect anything less.

For those who are not afraid of cinema that will most certainly push your boundaries and buttons, it’s really, really hard not to recommend Revenge enough. The film is the perfect modernization of the exploitative genre, using its sense of blended style and aggressive messaging to lift itself above its own flawed elements to being one of the best films of the year in any genre. It does require a bit of a tough skin to make it through with its significant amount of violence and intensely horrific sequences, but it’s completely and utterly worth the effort.