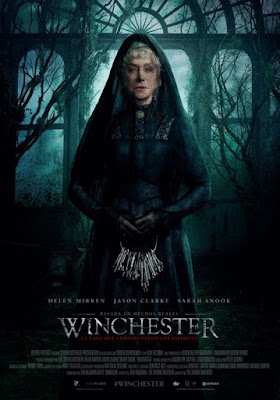 By all means, Winchester should be one of the best horror films of the year. The Spierig Brothers have a fantastic visual style, the film features two phenomenal leads in Jason Clarke and Helen Mirren, and the time period setting is ripe for a classic Gothic/ghost tale tone. So what exactly goes wrong with Winchester that it stumbles so badly? The answer is nothing really. There is nothing distinctly wrong with any of these things. Visually, the film uses its sets and period setting to give it enough of a decent look, the performances are certainly fine, and the film goes for that old school appeal of dramatic haunting with just enough modern tricks and jump scares to curb the appetites of the modern audience.

Yet, that’s also inherently the problem. Winchester should be so much more. This is a film that should soar with all of the great things behind it, but it simply comes out with a loud ‘meh.’ It’s a film inherently caught between being the artistic and atmospheric throwback it might have been and the more consumable mainstream scare flick it thought a mainstream audience wanted. The film so desperately wants to replicate the balances, tone, and effectiveness of James Wan’s The Conjuring films that it forgets to have its own identity. Winchester never truly spirals into being a terrible film at any given time, but it also never sets out to truly define itself from being mediocre. It has moments where one can see the more impactful film that it could have been, particularly in key moments like the garden room sequence of the third act, but ultimately Winchester never takes off the safety. 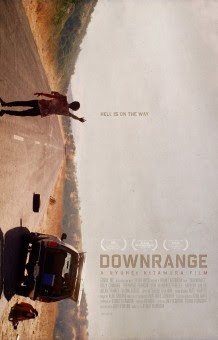 I've been awaiting the new Kitamura film for quite some time and, while Downrange does represent a slightly different film than expected, it does not disappoint. After his last few films in the US like No One Lives and The Midnight Meat Train, it’s easy to get excited for what he has to offer in terms of modern exploitation horror. His style has always worked well with the genre, but initial trailers would indicate that perhaps this film would be a more subdued and realistic foray into horror. Of course, this is a Kitamura film. We should know that he wouldn’t hold back.

Downrange is a brisk film that starts off as a stripped down and gritty flick that seems a lot more realistic than what fans might be used to from the director, but by the time it ramps up to the third act it has gone full exploitation with plenty of outlandish and logic defying moments that embrace the silliness of its plot for maximum entertainment. There are times when the dialogue or gimmicks of the film don’t necessarily make a lot of sense, particularly as some of the characters feel a bit thinner than needed for the full pay off of the suspense in the narrative, but it works enough to hook the audience. As the film plays out, the Kitamura we all know and love starts to shine through and the film goes off the rails using violence, dark humor, and some surprise twists to drill the film home. It’s not a film for everyone, thanks to some of the oddities of its narrative and approach, but I had a blast with what Downrange had to offer and it’s another massive success for the director in my book. 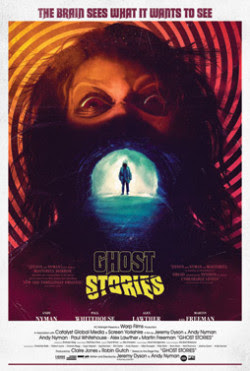 Based on a stage play, Ghost Stories was a much more intriguing experience than I expected from the initial trailers. Going back to watch those trailers, it’s not like they trick a viewer into thinking the film is going to be something other than what it is - at least on a surface level, but the full film plays off in ways that are both unexpected, perplexing, and often impressive. It’s almost like an anthology, weaving three individual ghost stories into an overall narrative of a ‘non-believer’ tasked with uncovering why they went unsolved. Yet, the film is not as nearly as disjointed as some anthologies are because each of the stories have a role to play in developing the lead character and the overall narrative. It works much better than expected and it moves swiftly through each of the stories and each development adds a new layer and sense of discomfort on top of the last.

It helps that Ghost Stories has a fantastic sense of humor to go with its well-developed sense of tension and spooks. It’s an impressively dry sense of humor, at times even running close to being Monty Python-esque, particularly in the third act as some of the questions of the mystery being built are “answered,” but in that regard it may not be for everyone. As the film finished, I had to digest what the strange third act did, twisting the film in some unique ways. In the end, however, Ghost Stories has such a strong sense of identity that it works and those who keep an open mind are likely to find a lot to love.