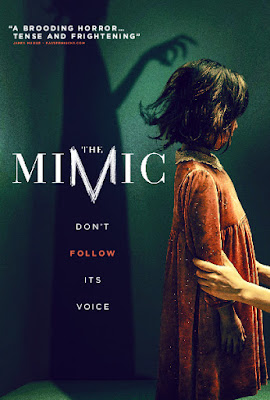 In all truthfulness, I am not at all familiar with the ghost story that is the core inspiration for this film, nor if the film is the ‘new spin’ that the back of the box art claims it to be on said ghost story. In those regards, I will attempt to just stay focused on how the film plays out to someone that is not familiar with the legend and how it stands on its own as a horror film. If there are readers out there that see this and have a commentary about how it relates to the legend, I would love to hear from you.

On its own though, The Mimic pulls heavily into the usual atmospheric and dread soaked tonality that made Asian ghost stories so popular in the late 90s and early 00s. The film focuses down on a married couple who are moving to a small town to help out their family. They are dealing with a lot of familial drama. Their son has been missing for quite some time and the husband’s mother is suffering from a mental illness that has pushed her into living with them. They still have a daughter to care for and they are in the process of overcoming their grief to work on patching up their lives. Naturally, these kinds of wounds invite some sinister supernatural forces and a recently reopened cave has unleashed one just in time to wreak some havoc on this family. Huh Jung soaks the film in some fantastic atmosphere, using the forested setting and isolation to maximum effect. It’s shot with a spectacular eye for the long and drawn out moments. Jung knows how to capitalize on dread and he slathers The Mimic in it. If anything, the atmospheric tone is perhaps the best part of the film.

This core familial element represents a double-sided issue for the film though. The Mimic is expertly crafted at its tone and on screen elemenst. The performances are drenched in a sense of sorrow and intense unease, particularly from Yum Jung-Ah who plays the grief stricken wife, and the performance from the young lost girl that shows up on their doorstep is also shockingly effective. The problem then remains that the film simply feels a bit too by the numbers to hit the emotional beats as effectively as it might have. We’ve seen these relationships before and the rest of the script doesn’t quite add the weaving depth needed to sell the entire concept.  There is an entire subplot featuring a detective that feels like it is only there for exposition, the daughter for the family feels like an afterthought compared to the lost girl in terms of the plotting, and there is a strange criminal character that kicks off the film that seemingly fades out of the script and only comes back to add one last scare to the obvious plot progressions. There are a lot of intriguing ideas presented in The Mimic, but one can feel the struggle in the film on whether it wants to be a stripped back horror film or a more complex mythology driven supernatural caper.

Still, despite some obvious problems in the script and the overall ‘been there, done that’ feel that the film is replicating, The Mimic succeeds where it needs to in the performances and scares to drive the film home. The finale is a gritty and heart pumping dive into occasionally surrealistic frights and Huh Jung absolutely does his best to create a layered film that is more than just the straightforward ghost story the film might have been. Horror fans will find plenty to love here in the smaller details and key moments, even if the whole is a rather mixed effort.

Written By Matt Reifschneider
Posted by DarkReif at 7:57 PM