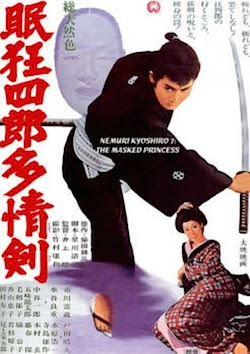 “For a villain like me, this is a very nice grave.”

In terms of this franchise, Sleepy Eyes of Death 7: The Mask of the Princess represents one key aspect of why it has been so successful: impressive execution. At this point, the formula of what constitutes a film in this series is pretty solidified and almost exclusively etched in stone, so there are plenty of elements to be expected in those regards. However, The Mask of the Princess uses those aspects to continually spin the film in some intriguing directions and plays on the audience’s expectations in some fun ways. On top of that, the film might be one of the more fascinating films of the series on a visual level with director Akira Inoue bringing a great sense of style and purpose to it that layers well with the narrative and script. Even when the film is predictable, it is able to be one of the best in the franchise on sheer execution.

The Sleepy Eyes of Death series has always found some fun and subtle ways to create a sense of continuity with its characters and vague references, but for this entry they really double down on it by bringing back the scarred daughter of the Shogun, Kiku, from the fourth film of the series. Unlike some of the more forgettable villains from this series, Kiku and her grudge against our anti-hero Kyoshiro really drives this film and creates a fascinating dynamic. Even when the film is going through the motions like introducing a wandering ronin who may be friend or foe that continually crosses paths with Kyoshiro, the sense that Kiku and her endless army of samurai and ninjas keeps the tension up and represents a fantastic driving force behind the narrative. Kiku with her masks might seem gimmicky, but she is easily my favorite villain thus far in the series.

To add a layer to that, the film takes a fascinating spin in how Kyoshiro acts. He is certainly the dark and snarky anti-hero that fans of the series will have come to love by this entry, played once again with subtle and fantastic depth by Raizo Ichikawa, but they add a new layer to his character that also adds some dramatic tension to the plot. The film gives him a young woman to be a sort of fatherly protector towards. This relationship, with a teenage girl that he rescues from a forced life as a prostitute, allows the film to parallel his own emotional beats with that of the scorned villainess that is hunting him. Not to give too much away as the film plays out, but his relationship and warmth towards the young woman is a welcome change of pace for the series and feels much fresher than it probably is considering that it still fits into the formula so nicely.

Also, as mentioned in the introduction, director Akira Inoue brings a fantastic visual style to the film that only elevates the material to higher levels. He loves to use these wide and often two-dimensional panoramic shots throughout the film with lots of intentionally cut lines. It creates a visual dynamic to the film that embraces some of the themes of connection (and disconnection) between characters and sets the film apart from the rest of the series by doubling down on taking a few visual quirks and cementing them as core elements of the storytelling process. I’ve tried to grab a few screenshots to showcase this style, but rest assured there is plenty more where those came from in this film. Whether it’s the framing, color scheme, or manner that he builds the narrative, The Mask of the Princess works impressively from a directorial stand point.

It’s not often that by the seventh entry in a film franchise that one hits one of the highlights, but this is definitely one of them. The Mask of the Princess is highly entertaining with its well-paced emotionally powered narrative that balances the action with heart and just enough well developed gimmicks to appease any hard to please chanbara fans out there. If anything, Sleepy Eyes of Death  7: The Mask of the Princess injects a well-deserved boost of energy into the formula to maximize and uplift all of the elements. It’s easily one of the best of the franchise.