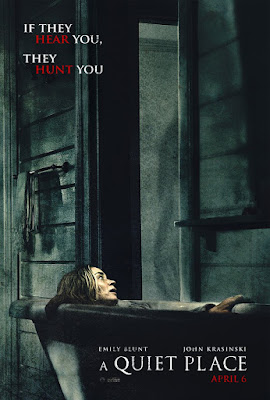 Being a parent is hard. It’s filled with drama and horror in equal measure with love and wonder. It is unlike anything else I’ve ever tried, and I’ve tried a lot of stuff. One unavoidable fact of family life is that while it is many things, it is always loud. Whether a baby is crying, a toddler is whining/screaming, or an older child is having a shouting match with a sibling, a parent, or themselves, there is rarely an escape from the flood of sound that accompanies domesticity. The constant assault of this sound is already a point of anxiety for parents, if not because of the current situation (cough-we don’t need to inform the checker why I’m a boy but thanks anyway toddler) than from the unrelenting stimuli that are as exhausting as they are raucous.

Now picture a world where sound equates to quick and painful death. Suddenly getting your kid to stop talking and go to sleep becomes less of an agitant and more of a necessity. This narrative is crafted with careful and masterful care in what will quickly become one of the defining horror films of our generation.

I can honestly say that I’ve only ever seen one other film that was as poignant for me as a parent as A Quiet Place. It holds good company, as The Babadook is its only real point of comparison for familial heroics.

When this was announced, all I could think was how odd it was that Jim from The Office was making a scary movie. With the meteoric rise of Jordan Peele’s debut with Get Out, horror is getting a fresh infusion of talent with comedic roots with welcome reception from audiences and critics alike.

This infusion has led to fresh takes on arguable the most cliché prone genre of cinema. In case you haven’t heard, this movie doesn’t have a lot dialogue. This challenge of telling 90% of a story (estimate, I didn’t actually count the minutes) without speech is a gauntlet thrown at the feet of actors and cinematographers alike.

They answered the challenge with all the quiet resolve of a Hitchcock based slap in the face.
John Krasinski and Emily Blunt’s chemistry is greater than I have seen in recent history, reaching to the core of both marital and parental conflict. The depth of the portrayal of their relationship is striking, augmented by the lack of dialogue.

Based on number of appearances in horror films, corn may be the most terrifying vegetable.


The children are the greatest surprise in this film. Millicent Simmonds is actually deaf in real life, so living in a world without sound was familiar territory for her. Noah Jupe is her foil as the two navigate their tween existence in a twisted apocalypse.

While the acting was impeccable, the true strength of this film lies in its writing and breathtaking execution. Krasinski left himself no safety net. Embracing the Hitchcock-Shyamalan school of thought, he uses minimalism as a weapon of mass consternation to inflict cerebral panic in place of the jump scares that could have easily dominated this film. The rural aesthetic brings a resonant melancholy to the picture, painting in broad stokes that allow the more terrifying moments to pop.

The relationships give this movie the drive that it needs to capitalize on its wealth of suspense.


The apocalyptic vehicle carries more routine narratives that will feel hauntingly familiar. Teenage angst, navigation of gender roles, and balancing relationships with multiple children offer footholds that may leave you more uncomfortable than the creatures on screen. This effective use of a horror vehicle is part of what makes the genre (and cinema as a whole) one of the most cathartic art forms at our disposal.

Don’t miss this film. See it in theatres if you can, but make sure you see it. If nothing else, it will add some perspective to the screaming children that we’re all surrounded with at some point.