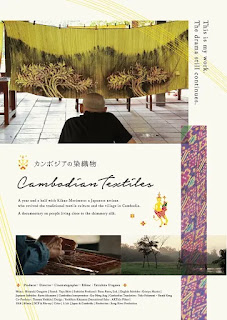 Kikuo Morimoto, a Japanese native from Kyoto, travelled to Cambodia after its civil war, where the art of traditional textile weaving was practically extinct. He renovated a large piece of land and created a village that strived in this near forgotten art, crafting a successful economy and a village that has a lot if heart. During the time this documentary was made, Morimoto had revealed he was diagnosed with skin cancer and opted to not receive treatment, but to rather let life go its own pace on him. We see roughly two years of he and the locals lives as he inches closer to his departure and reflects on the state of Cambodian textiles and the community he helped build all these years ago.

Right off the bat, Cambodian Textiles is an absolutely beautiful looking documentary that has as much heart as it does visual flair, with Tatsuhito Utagawa being a one man movie making machine, acting as the film's producer, director, editor and cinematographer, giving us a singular and truly accomplished and unique vision brought to life in every rich frame.

Very smartly so, while Morimoto is clearly the pulse of the film, it's the village and its inhabitants that make up the heart in which his existence flows into every aspect of the village, from the attitude and work ethics to the process and art of the textile weaving itself, the documentary chooses to explore all of these elements truly breathing life into an already bustling village. They may be on the smaller size in their population but they are a force to be reckoned with and have singlehandedly resurrected the industry while also taking it by storm. We see a fashion show and a festival focusing on the children of the village, their hard work enfused into these celebratory occasions.

Instead of beating the audience over the head with a forced emotion of trying to draw tears out over Morimoto's cancerous suffering, it opts to go with the flow, or rather an ebb, as he does, letting his life be lived, accepting his fate and moving on, regardless of how many steps he has left to walk. He focuses solely on his craft, the arts and his people, while looking back at his history through an ongoing interview that weaves in and out of the main narrative. We do see him travel back to Japan periodically as his condition worsens, but home is where the heart is and he can't keep away from his Cambodian people for too long.


When I went into this documentary, I knew nothing of Morimoto or the art of traditional Cambodian textile weaving at all, and wasn't really interested, but even in my case, the film successfully pulls you in and shows off every step of the process in such an educational and visually simulating way. Just the image of silk being hand pulled from the basket of locally harvested worms, may be engrained in my mind for months to come.

I went in with little interest but left having learned a great deal and I highly enjoyed my time with Mr. Morimoto and the villagers in this tiny region of the country. Time never stops for any of us, so we must always find something to be proud of and something we can pour our very souls into while we are given the same opportunity to do with every day we are a part of in this short time lived. A fantastic cinematic journey that I'm glad I took and easily recommend to any lover of art or documentary film.