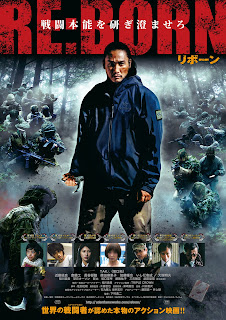 This movie is absolutely insane!!! Tak Sakaguchi comes back from a brief retirement for one more action fueled joyride that comes with an overwhelming barrage of action scenes that never disappointed. Zero-range combat tactics, created for the film by action choreographer Yoshitaka Inagawa, called to mind the intense hand-to-hand from the video game franchise, Metal Gear Solid. That is no complaint and in fact pulled me into the action even closer, no pun intended whatsoever.

I like the comic book/video game like villains/bosses that popped up throughout to challenge Ghost (Tak). The action is speedy but the camera blends various ways to capture the choreography and creates a fluid yet chaotic sense of fighting. The various blades and weapons used throughout with a splash of gunplay thrown in here and there keep things varied and engaging.


Tak gives a pretty simple performance but it works and gives his character just enough depth for us to care about him and not make him just another generic action guy lead. It's clear he went above and beyond here and it shows on-screen. This is easily my favorite film I've seen him in. Also, it was nice seeing Orson McClellan (Bad Poetry Tokyo) in here showing off a much different side of himself.

I can admit that I was never a fan of the director and Tak's previous collaboration, Death Trance (2007), so I went into this a bit skeptical. I am in the minority on my disappointment in that work, as it has a pretty decent cult following, so if you are in a similar mindset as me and may potentially shy away from this one, DON'T! It is something else entirely.


Fans of The Raid or John Wick movies should find plenty in here to have the action lobe in their brain stimulated by. Seriously, this needs to reach the hands of every action enthusiast out there. It will please in the way that many modern action flicks fail to do nowadays. Light in its storytelling but heavy in its fight scenes, Re:Born is one of the finest action movies to come out in the last decade. Completely surprised by this one. See it now!