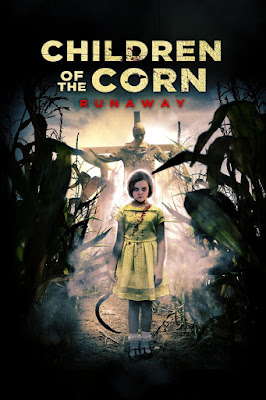 After Children of the Corn: Genesis and the truly abysmal made-for-TV remake of the original, I was ready for the Children of the Corn series to be laid to rest and buried behind the rows of sweet corn. It was obvious that this series had grown, was harvested and left the soil unfit for further cultivation. When it announced that the ninth entry into the series (yeah, nine entries) would finally get a release after being stuck in developmental hell for a handful of years, my excitement could be measured in a long and drawn out sigh. Even worse, Children of the Corn: Runaway was directed by John Gulager who managed to kill his own Feast franchise and make Piranha 3DD too stupid to survive. Imagine my surprise that this ninth entry to a series (that didn’t really deserve four entries) came out as not only decent, but one of the best that the franchise had to offer - not that it means much. It simultaneously reboots the series in a clever way while at the same time delivering a modernized spin on the intellectual property that matches the current trends in horror. Yeah, Runaway is not just another hackneyed slasher, it’s actually a horror film that expands on the mythology and pushes it into some new territory. It’s a mixed effort ultimately, but I’ll be damned if I wasn’t pleasantly surprised.

What works best for Runaway is that the film is contained and its built on one key emotional driver: a mother and child relationship. After setting up the premise of a young woman, Ruth, who attempts to destroy the Corn Kids Cult and runs away after becoming pregnant, the film skips forward 13 years and showcases how they have been essentially “on the run” for years refusing to settle down as she fears something is after them. It’s a relatively thin premise, essentially, but it allows the film to take the series mythology and it spins it into more of a psychological horror film instead. When the mom and son combo is forced to settle down in a small midwest town by circumstances out of their control for a brief stint, they encounter a series of small town cliches that start to weigh on her and she starts to have visions about the kids of the town picking up where the last cult left off. It’s a smart maneuver for the film to strip the narrative mythology down to its roots, focusing instead on the bleeding of visions and reality that parallel her own trauma with that of her motherly need to protect her child. It modernizes the series to fit in with the more artistic and vague narrative trends that are currently popular in horror and truthfully it's kind of clever. It may not feel like previous Children of the Corn films - at least tonally, but that doesn’t mean it fails. Who knew this would have been from the same writer as Children of the Corn: Genesis?

Beyond that, the execution of Runaway is a bit more mixed than expected. The performances range from subtly impressive to awkwardly over the top, the special effects and kill sequences try to be classic horror on a budget but occasionally fall into being predictable, and the more dreamlike elements that increasingly take hold as the film progresses can fringe on cheesy instead of impactful. Considering that the film takes a rather unique approach to the material, there is a lot of potential in the film and it’s surprising that Gulager pulls back away from his usual over the top and offensively tongue-in-cheek style, but the film does fight against itself and its budgetary constraints at times and it doesn’t nearly fly as much as it might have with a couple more drafts of the script or a tad more money to show on the screen. Pleasantly surprising overall, yet it’s still a mixed effort that will have most fans scoffing at it.

It sounds simple enough, but changing the direction of Children of the Corn: Runaway - regardless of the mixed execution - is the right move. Fans for horror, particularly of some of these larger franchises, can be incredibly fickle with their material and this film is going to rub a ton of them the wrong way for either changing too much from the original formula or sticking too much to the consumable nature of a low budget horror flick, but for this reviewer Runaway is a massively pleasant surprise. It’s still a flawed film, significantly so in some regards, but the ambitious attempts at taking it in a new direction is respectable at least. Keep your expectations in check and you’re likely to reap some fun out of what this film has sown.