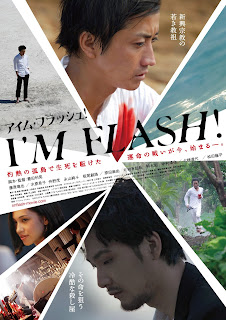 Toshiaki Toyoda is a filmmaker whose body of work I have only explored the early stages of. Having seen his first four features and being a fan of each: Pornostar ('98), Unchain ('00), Blue Spring ('02), and 9 Souls ('03), I think I have a good grip on what I like about the man and what makes his works click for me. He has a plethora of interesting characters in every narrative and his anarchic sensibilities lead to this brisk and punk in your face mentality that lends itself to some very memorable cinema. I'm Flash!, a later work in the auter's oeuvre, is no different than his early outings in this regard and is filled with the same chaotic energy that attracted me to his works in the first place. Age hasn't extinguished that fiery spirit whatsoever. I'm Flash! easily stands alongside the director's early gems.

Rui, played most brilliantly by Tatsuya Fujiwara, is the guru of a new religous group that has pushed him into the spotlight of various media outlets, forcing he and his family operated "business" to excel to extraordinary new heights, both financially and popularly speaking. One day Rui is involved in a tragic motor accident that finds his girlfriend in a coma and himself being pushed into a frenzy. To clear his head, he heads to a private island where he and his family move to permanently. Once things are seeming to calm within him, a string of unusual events throw the religious leader into a downwad spiral of madness as he begins to question his own purpose and the existence of a God they fabricated.

If that sounded a bit long-winded that is because at only 90 some odd minutes, director Toshiaki Toyoda packs as much philosophy and character interaction as he possibly can into this narrative. It works too as we explore themes of religon, self worth, fabrication of beliefs for profit, and even to a degree, family and how money can control every facet of our very existence. It is above love and even God and creation for some.  The film itself isn't religious or anti-religious in anyway, but does raise some great questions and valid points. Sometimes faith and its followers are nothing more than a business model to make its founders fatter in the pockets.

As usual in Toyoda's works, the cinematography is excellent, showcasing with a sharp eye the natural tropical landscapes in Okinawa, where despite the depressing and uneasy atmosphere the film exhumes from its very core, it is quite a lush and relaxing 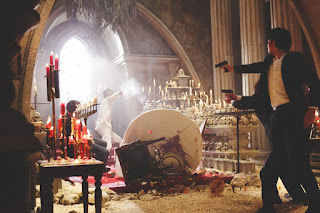 setting, geographically speaking. In addition to the wonderful visuals, we get excellent perfomances from the trio of side characters that are hired as Rui's bodyguards. They don't have a ton of development but are interesting nonetheless, and it isn't very much a complaint as Fujiwara is the centerpiece. This is about his psychological shedding and realizing that beneath his camer friendly persona lies a beast of burden, and the philosophical spews he goes on are truly something to behold. I haven't even mentioned the fact that one of the bodyguards is played by Ryuhei Matsuda and that is because Fujiwara steals the show in every scene. I think this is easily the best performance I've seen by him. 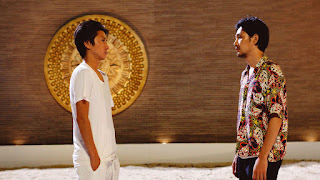 I don't particularly have any complaints on the story or where it goes aside from wishing that the runtime could've ran a bit longer as I wanted to know a bit more about some of the characters other than Rui. I sort of think there is limit in their exploration as a result of how he (Rui) has become so self-centered that he has lost the ability to connect with others thus distancing us from anyone but himself developmentally, but that could be overanalyzing. Regardless it is something I would have liked a bit more of. Oh, and characters should never make unbroken eye contact for the absurd lengths of time they did between Rui and his girlfriend in their driving flashback scenes. No wonder they got into a wreck.

I'm Flash! ended up being a big surprise to me as I think was poorly advertised upon its initial release in Japan back in 2012. I had no desire to see it but thankfully I have since found great interest in Toyoda and I am very glad I reached out and was able to view this movie. It may not reach the exact same heights as something like 9 Souls, but it gets pretty darn close. Really hoping this has some sort of Western release at some point. It deserves to be seen by many more.