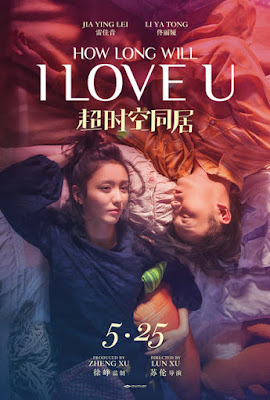 It’s not often that a cult cinema site like Blood Brothers is offered the chanced to run coverage on a romantic comedy and, normally, it’s one that we wouldn’t pursue because, well, how many rom-coms have genre elements that would even fit into the realms of cinema we cover? However, How Long Will I Love You had a twist. It’s a film that uses a time-travel/multi-dimensional gimmick as the hinge in bringing the two leads together for their rom-com tropes. It was enough to perk our interest in the film and here we are…writing a positive review for a rom-com. In many ways, the film suffers by adhering so vehemently to the tropes of the genre. Enough so that large swaths of the film are easily predictable. On the other hand, the film subverts them with its own messages about fate and serendipity through its strange fantasy elements. It’s a teeter-totter kind of back and forth that makes it feel a bit more sporadic then needed, but ultimately the saving grace of How Long Will I Love You is that no matter which way the film is leaning, it’s irresistibly charming and powered by the hilarious and heartwarming chemistry between its two leads.

Initially, How Long Will I Love You struggles at getting its footing in the right direction. The introduction to our two lead characters is fine, showcasing their situations and overall charming and awkward demeanors, but it’s predictable and rather hum drum overall. Even when the film starts to maneuver into more unique territory, as two timelines are thrust together to get our ‘star crossed lovers’ together and add in the gimmicky duel timeline aspect, the film stumbles in getting it all across in a fluid manner.

Don’t fret though, the film starts garnering some momentum in the second half. Most of this is due to the rather fun and awkward chemistry between the two leads, Jia Ying Lei and Li Ya Tong, and how the film handles the subtext of its gimmicks. Firstly, I have to admit that I was rather smitten with the two characters and their development as the film progresses. Of course, the film does not stretch too far from the plot progressions and character arcs that make up the formula of a rom-com. They initially have their differences, which is played out in some fun sequences through secondary characters or through some entertaining fish out of water moments when one of the characters is out of their element in the other’s timeline, and then of course the blooming romance starts to take shape. As mentioned, the emotional roller coaster is decently predictable. Yet, it’s sold because of their performances in the roles and the chemistry is impeccably heartfelt and infectiously charming.

However, the most valuable element of How Long Will I Love You is how it takes the usual formula about two individuals who are ‘meant’ to be with one another and subverts it with its fantasy elements. Granted, this is a part of the film that will require spoilers to fully analyze and explain why it works, so pardon this review for being somewhat vague here. Still, the film uses its timeline jumping to deliver plenty of character reveals, comedic tidbits, and a surprisingly intense final act that will leave plenty of rom-com fans wondering why other films from the genre haven’t explored the concept of ‘destined’ lovers in the same balance and fun ways that this one does. The dual timeline aspect might seem gimmicky (and at times it very much is,) but I’ll be damned if the film doesn’t use it in some decently clever ways to really add a level of unexpected depth to the film.

If I were being completely honest, I did not have high hopes for How Long Will I Love You as a film. It’s a genre that has faded for a reason and the gimmick of its time collision seemed like a legitimate reach to find any kind of reason for the film to exist. Yet, as the credits rolled I found myself emotionally connected to the film, hooked by its ability to be fun, charming, and shockingly artistic as it takes the usual formula and adds its own flavor. Perhaps it is not a film for every reader of this site, but How Long Will I Love You is certainly a fun surprise for the year and still gets a solid recommendation.