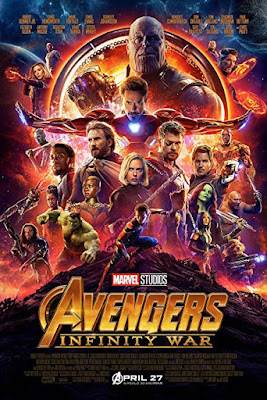 Ten years. The established Marvel Cinematic Universe has been running for ten years and while the quality of the material has seen its fair share of ups and downs over that period, one cannot deny the impact that these films have made on the industry as they have only continually garnered momentum. Eighteen films in this series and after the last handful reached heavy critical and box offices successes, it has all culminated in Avengers: Infinity War, the first of a two-part mega film that gathers all of our heroes into one massive epic against a villain they have been hinting at for the majority of the series. After Avengers: Age of Ultron was a massive misfire and Civil War doesn’t hold up nearly as well with repeated viewings, I found myself skeptical that a film with roughly 2 million characters (estimated) was going to be able to pull anything off worthy of the hype that was surrounding Infinity War. However, this film is not to be trifled with. Not only is it an efficient crossing of the entire series of films, powered by the development of the characters in other films, but it takes a lot of chances that betray the general formulas of the MCU thus far that will leave fans both perplexed and intrigued. It’s both consumable in its nature and occasionally bold for a blockbuster.

One of the problems in reviewing a film like Infinity War is that, due the nature of how the MCU is built, it’s ripe for vague talking points because of the likelihood of spoilers. Not only for this film, but for other films that come before it. Even a few weeks out from its debut, our intent at Blood Brothers is to perk discussion about film and not spoil the experience, so pardon our vague approach to many of the details in this film. It’s meant to be the first part of an ‘endgame’ for ten years of films, so keep that in mind as you read the rest of this review - and/or if you haven’t seen the film yet.

On the surface of Infinity War, it would seem that the Disney/Marvel machine is chugging along quite admirably. The film generally does everything it can to appeal to what fans are expecting out of this film, from stuffing damn near every character into the narrative for at least a little time to getting them to banter as they leap from explosive action sequence to explosive action sequence. Granted, even with the amount of time and money that’s obviously thrown at the film there are some odd holes here in there in these parts like how they seemingly throw both Hawkeye and Ant-Man to the wind with a random line or two. Yet, it’s obvious that, as with previous films, The Russo Brothers are adept at crafting big scale action films with just enough depth, heart, and character that the balancing act is one impressive feat even if there are things to be nitpicked. They keep the pacing swift, particularly for an almost 3-hour film, and never really let the audience leave the scene as it bounces around a handful of different plot lines before finally rolling into a conclusive (and concussive) epic battle at the borders of Wakanda for the third act. The action is diverse and dynamic, the characters don’t need much in full arcs since we’ve spent so much time with many of them previously to get the payoffs needed, and the balance between action, comedy, and drama is remarkably effective. Even on the surface, Infinity War works like the formulaic blockbuster that the MCU is now so effective at producing without skipping a beat.

However, just running through the motions only gets one so far and it wasn’t long ago that Marvel was struggling to figure out how to fit the formula while adding in some new style and dynamics to the system. Examples include how Marvel stuck to the usual origin story tropes for Dr. Strange with eye-rolling panic and  there is the rushed feeling of trying to set up cheap emotional payoffs in Civil War. With the last few films though, Marvel is finally learning from their mistakes and finding their way into creating new tones with their films. Successes like the Thor: Ragnarok and Black Panther showcase this in full. Avengers: Infinity War continues on this path of taking just enough chances within the realm of their formula to make it feel fresher and more intense then it probably is in the end. To say that this film is out to throw down its fair share of shocking moments is an understatement for the series and, for those who haven’t seen it yet, expect to be thrown for a loop in how the film approaches the casualties of war in the film. Not all characters are making it out. That’s not even the most ambitious element of the film though. In a way, it’s expected. The most ambitious part of the film is how they handle Thanos, the big bad who has made a few appearances in the series over the last ten years, and his quest for the Infinity Stones. Instead of focusing on our heroes and giving them new character arcs in their collision course with the Mad Titan, the film opts to make Thanos the main protagonist driving the narrative and allowing the slew of heroes to react to him to drive home their own character work that was established earlier. The development of their nemesis is an inspired move, furthering the fantastic work at actually creating a dynamic villain in the last handful of films - particularly that of Killmonger in Black Panther - and it is the ace in the sleeve of Infinity War that makes it all work.

On the slim chance that you haven’t seen Avengers: Infinity War yet, it’s a safe bet that if you’re remotely interested in the MCU that you should immediately see it and see it in theaters where the epic visuals and bombastic sound design are going to hit their max. If anything, the manner that The Russo Brothers find the almost perfect balance between consumable blockbuster action packed and charming material with the more intriguing spins on the formula make it a fascinating piece of modern cinema. Despite the slew of box office sales, high critical praise, and fan worship, there will be those out there that continue to write off the MCU as simply fodder for the masses. Even then, within that context, it’s hard not to be impressed with what this film has to offer. It was ten years in the making and it’s essentially only the first half of a story, but Infinity War is something to behold in the realm of blockbusters.