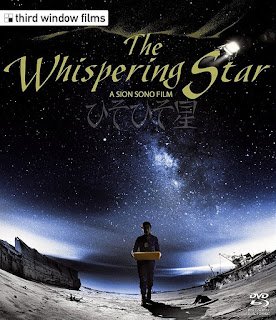 A passion project of Sono's 20 years in the making, The Whispering Star sees the director make a return to a more thought provoking form, and stylistically and thematically harkens back to an early point in his career, calling to mind such works as The Room or Keiko desu Kedo, for point of reference. For fans of these earlier works, you'll have an idea of what you are in for. That is, a much less extreme cinema and a slower, reflective film bathed in lush visuals that really gets your mind going. Frankly, I believe Whispering Star to be one of Sono's best work yet. It's familiar, yet exerts a freshness we haven't seen in his works before with its overall visual aesthetic and genre choosing (sci-fi).

In the future, Yoko Suzuki is an android whom lives on a house-shaped spaceship, that travels throughout the universe, visiting various planets stretched across numerous galaxies, delivering mail packages to various humans. One thing all of these planets have in common is sparce landscapes and an even more noticeable, they are mostly vacant with  a very scarce amount of people populating them. She wanders through these bleak but beautiful ruins which brings to mind the reality of the ravaged Fukishima in Japan, bringing a huge note of sorrow and reflection of reality amongst these eye candy filled shots. 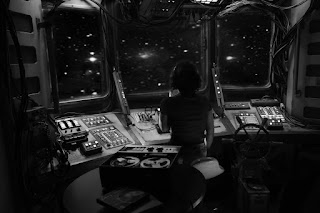 There isn't really a ton to the plot but it works entirely as the film is much more an audiovisual experience that stimulates the mind as such. Quite a bit of symbolism is embedded within and on display throughout and warrants the film repeat viewings to fully appreciate and take in everything so meticulously crafted on-screen here. I feel like it will make its way deeper and deeper into my heart as I revisit over the years and that is a great feeling.

Megumi Kagurazaka is phenomenal in her role as Suzuki. She is quiet and reserved and brings us a curious and intriguing individual who act as a vessel of sorts as we travel along through the quiet vastness of space with her. I think her performance is quite remarkable and really shines the further the film treks on. I don't want to go into specifics but this is my favorite work of her's bar Land of Hope. Sono truly has helped craft his wife into an extraordinary and versatile actress. 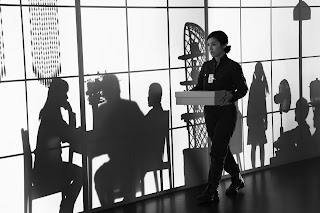 People looking for another extreme and loud anarchic piece of in-your-face cinema from the master of it are sure to be disappointed, but for those interested in seeing the auteur harken back to his earlier days and simultaneously birth something fresh to add a new layer of variety to his oeuvre, you are guaranteed to eat up every frame of The Whispering Star. It's breathtakingly gorgeous to look at and oozes with a completely unique style and concept that delivers strongly on both accounts. I really wish to see Sono show this more reserved side of himself more often. He truly makes one of a kind works and this is no exception.