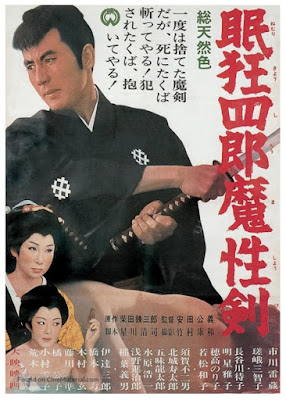 “Tsurumatsu! Don’t close your eyes. This is what it means to be a samurai...to kill each other!”

The Sleepy Eyes of Death franchise, by the time the third and fourth entry have hit, certainly found their formula where Kyoshiro, played time and time again by the impressive screen presence of Raizo Ichikawa, essentially stumbles into random conspiracies while on the road. For the sixth entry, titled Sword of Satan for perhaps only one reason that I will get into here in a minute, the film continues to pump out another adventure for our nihilistic hero...and that’s about it. The last couple of entries has seen the series pull back a little bit from the usual gimmicks and tonally that remains for this sixth one, but this is a film that is so bare bones in its narrative that it uses most of its second act to string together somewhat random sequences to keep things exciting. Considering the film runs at such an efficient pace that it only clocks in at a whopping 75 minutes, it’s hard to say that it wasn’t entertaining even if that’s about all it is. Sword of Satan doesn’t have quite the lasting effect that other entries into the series have and that’s perhaps its biggest flaw.

Granted, as mentioned, Sword of Satan is so quick on the draw of its entertainment, you would think that anything more than what’s on display here would be considered fluff. Immediately we find our anti-hero, Kyoshiro, in the arms of a woman desperate for shelter and wearing a strange Noh mask. Only a few minutes in and the film already is throwing him straight into the fire of a conspiracy on hand and this opening sequence kicks off the main narrative that features a young man in the process of being kidnapped to be the true heir to a clan who may be abolished if he isn’t found. Of course, despite his own selfish nature, Kyoshiro is quick point out the injustice and hypocrisy of the situation and launches on his quest to save the boy from a life he doesn’t want while leaving a heaping number of bodies in his wake in the process.

This approach to the narrative that is quick to leap into each scene with little exploration of the tidbits of more interesting layers that occasionally show up - like the use of the Noh mask and its repeated arrival, does make it very fun to watch. Sword of Satan isn’t much into digging into the social constructs or class warfare that the series is known for (although that certainly comes into play as the kid hates samurai and refuses to be royalty and instead fights to be the best carpenter in Edo like the man who raised him) so just buckle yourself in and enjoy the ride. The action is dynamic and crisp, thanks to returning director Kimiyoshi Yasuda, and as always, the performances find that perfect balance of exploitative fun and dramatic heft. Even when the film is seemingly whipping around tangents, the visuals are strong and the sense of dramatic entertainment works. On this level, Sword of Satan is simply an enjoyable chanbara.

Of course, the second act is almost completely comprised of a series of strange gimmicky sequences that ultimately don’t add a lot to the narrative or the characters of the story on hand. Predominantly, there is one sequence where Kyoshiro is lead to a temple that is being used for a “black mass” and it comes off as rather awkward and out of place - although our hero’s dispatching of the evil priest clad in black and red certainly got a solid chuckle out of me. I’m guessing it’s this sequence that tends to be the most memorable for fans and the reason for the title, but really it feels like it’s placed in there for the sake of the visuals and for a sequence to set it apart from just being the usual chanbara film. There are quite a few random scenes in the second act like this, but this one stands out for being really out there.

However, despite its obvious flaws in narrative flow through the second act, it’s lacking emotional resonance for the characters, and a finale that seemingly wraps up much too quickly thanks to a deus ex machina, Sleepy Eyes of Death 6: Sword of Satan is still fun and quite enjoyable. It’s brisk with its pacing and there a few surprises on hand, including a character that’s related to one of the better characters in previous entries that steals a lot of the film, so there is entertainment to be found in the film. Don’t expect much more than that and Sword of Satan will leave fans satisfied. Not nearly one of the best of the Sleepy Eyes of Death series, but it’s also not a bad film either.

Written By Matt Reifschneider
Posted by DarkReif at 10:55 PM