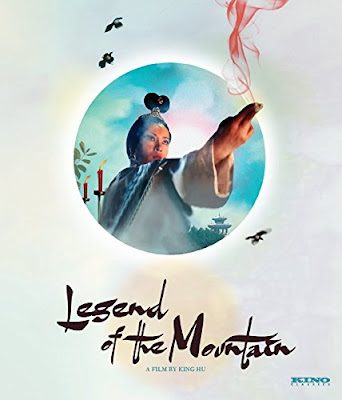 Legend of the Mountain remains a rather unique cinematic experience for a variety of reasons. As one of the overlooked films in King Hu’s filmography, particularly compared to his famous wuxia films like Come Drink with Me, Dragon Inn, and his artistic pinnacle A Touch of Zen, it’s truly a wonder that this film finally finds itself with a proper release in the US via our friends at Kino Lorber. It’s not a film for everyone, thanks to Hu’s enigmatic narrative and almost-too-much-of-a-good-thing visual and auditory approach to the film, but for those that are seemingly up for the 3+ hour leap into realms of magic, love, and just a hint of horror, it’s a film that embraces its cinematic experience in full.

As Legend of the Mountain starts, plugging in a narrator that sets the scene of the time, place, and foundation of the film by introducing the audience to our main protagonist - the often unknowingly naive Ho, it’s obvious that King Hu has no real intention of following more traditional narrative structures and pacing with this film. After our ‘hero’ picks up the sutra that he is meant to copy, he spends roughly 20 minutes wandering the countryside in search of his abode to perform his work. This gives Hu the time to gloriously showcase the setting of the film, the landscapes of Korea, and truly revel in developing the visual and auditory journey that the audience is about to experience.

It’s almost fitting that, in this opening third of the film as Ho finally settles down only to be manipulated by strangers from the mists of the landscape around him, that the film establishes this ethereal tone. As much as Legend of the Mountain is a supernatural thriller at its heart as Ho proceeds to be pulled to many sides by rituals, magic, and visions, Hu never treats it like one and instead gives it this tone where real things like the buildings, forests, rivers, and animals are lost in the haze of time and magic only to be shot in elongated moments of drawn out establishing shots and emotional sound design. This is not a film necessarily meant to be watched for its plot, which is thinly spread over its three-hour time and could have easily been trimmed in half without losing any of the narrative strength, but it is one to be appreciated for its artistic approach to a genre known for its gimmicks and exploitative nature by 1979, the year of this film’s release.

For the artistic cinephiles, this portion of the film will appeal, but for readers of this site, it’s the colorful and often intriguingly vague supernatural elements that are going to be the highlight of the film. By the time the second act rolls around, introducing another mysterious female character to entice our lackluster protagonist Ho, the true plot and narrative truly starts to kick in. Granted, by now a viewer is already well over an hour into the run time and if you’ve made it this far you will get to enjoy the smoke and drum pounding duels of demons and Lamas. Hints of horror elements even start to seep into the film at this point, thanks to a wonderfully tense sequence where a Lama investigates an empty house that’s punctuated by a flurry of drumming and a somewhat terrifying trip to an inn for our protagonist in the last half hour. While the cinephile in me certainly respects the film, it’s a wonder that Legend of the Mountain doesn't run with these elements to deliver even more dynamics to framework beyond the third act.

The lengthy and fluid narrative can be a bit hard for some to swallow as the film tends to play things far more artistically than for the entertainment of its fantasy driven concept, but it’s obvious that King Hu is in his element here in toying with the visuals, sound, and refusing to obey the logistics of a more stripped down and structured approach. The performances are all layered and fascinating, outside of perhaps of the protagonist Ho who acts as sort of a blank canvas for the secondary and more interesting roles to paint on, and the balance of all the cinematic elements are done with pure intent by the director. This is definitely not a film for everyone, but for those with the patience and focus there is a lot to love about Legend of the Mountain.