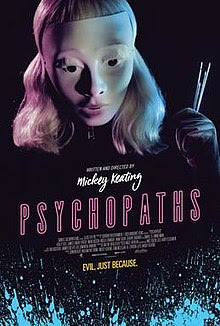 In recent years there has been a resurgence of artistically charged horror films in the mainstream conscious, but there are always those truly enigmatic and impressive films that lie in the undercurrent of what’s popular. Even though the filmography of Mickey Keating tends to fit into the rising popularity of the arthouse horror with his focus on atmosphere and artful visuals, most of his films tend to find themselves buried with limited releases. His latest, Psychopaths, was once again given little fanfare when it first hit VOD and now it is even available to stream for free on Amazon Prime with little in the way of marketing or word of mouth. This is a problem because Psychopaths, for all of its divisive approaches, is a dynamic, perplexing, and impressively well-crafted modern arthouse horror affair. It might be Mickey Keating at his most Mickey Keating, but it resonates in a strange way that really had me hook, line, and sinker.

There is a sequence during the third act of Psychopaths, where the narrator, who at this point has been the one part of the film that really gives the thematic threading and drives the film forward, essentially apologizes to the audience for the film’s style. This self-aware moment, where the film addresses its two big stylistic choices indicates that Mickey Keating knows exactly what film he intended to make. Love it or hate it, the film knows exactly what it is and embraces it fully. Keep that in mind before even starting it.

The two big stylistic choices boil down to a throwback of intense visuals and bursts of violence that intrinsically mirror some of the tones and looks of the 70s giallo. Psychopaths uses the neon swaths of intense coloring and deep contrasts of light and dark to drive home the simplicity and artistic sense of urgency of the film. Keating is not afraid to use long takes, letting the sequences feel like they exist in real time (with unrealistic visual elements too), and his sense of slow burn is developed hand in hand with the film’s often dreamlike - more like nightmarish - qualities. The narrator, as mentioned previously, acts as a guide through most of the film and gives it a slightly noir-ish tone that also adds another layer that balances out the somewhat poetic tendencies of the film’s dialogue. This allows the bursts of horrific and realistic violence to stand out from the rest and drive home the film’s thematic point about the connections (and disconnection) of chaos.

While this style is divisive, cutting sharply between exploitative and arthouse, it’s not necessarily the most divisive aspect about Psychopaths. In fact, there are a handful of other filmmakers that are using a similar style to this, in particular the directors of modern classics like Amer and The Strange Colour of Your Body’s Tears come to mind. The thing that makes this film so unusual is that Keating loves to toy with the entire structure of the film. Not only are the visuals dreamlike at times, but the narrative and structure are outlandishly fluid. At times, it’s hard to see where the film may be going, particularly as it develops multiple storylines with different characters and different villains, but it fits with the themes and tone even when the film doesn’t necessarily go where an audience would want it to go. It can be frustrating for a viewer, one that’s invested in piecing all of the vague elements together, but rest assured it never seems to misstep in what it wants to do. It is just that Psychopaths is a hard film to consume casually.

While I find it disappointing that Psychopaths was essentially buried for a release in the US (and only received a DVD version when a Blu Ray would have looked spectacular for the imagery), it’s not that hard to see why. The film will have its large share of detractors for its vague narrative, strange fluid and atmospheric approach to what could have possibly been an anthology of sorts, and intensely dynamic sense of exploitation meets arthouse. For those that it does resonate with, myself included, it’s something of a horror gem, buried in with the scraps of straight to home video trash and waiting to be found and admired by a loving cult audience.