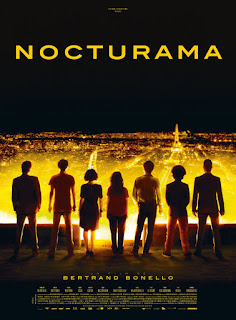 Aside from some alluring production stills of the film and the nicely designed poster, as seen above, I knew absolutely nothing going into Nocturama, and perhaps for the better. It is a slow burn thriller that greatly reflects the aspect of modern society that matters most, the youth. Without going into personal beliefs and opinions, there is no question that time always moves forward so it is inevitable that the youth will always one day raise up and carry on where those before them left off, and it has always been that way. This film explores a very scary and real look at an abstract mindset in some of those minds today that look to change the world.

I don't wish to spoil the plot or where it ends up, but is admirable in what it does and how it does it. Unfortunately I couldn't really relate to any of the characters but I found some of them quite intriguing and enjoyed that each of them were identifiable in who they were and for the what they hoped to achieve, more so as a group on the latter, whether what they were seeking out was truly obtainale or not though  is for another discussion entirely. 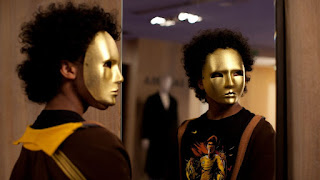 The slow burn pacing of the film is refreshing and in the first half of its runtime especially as we get a sort of mundane but very meticulously played out look at these young terrorists and what they are setting up to unleash against their city. I was drawn in by every little detail being shown to the fullest and its intricacy is worth praising.

That said, at times I questioned these other civilians and workers that interacted with them which just seemed to go along with somewhat obvious suspicious behaviors, and a couple of these plotters looked like little kids, but walked around in suit and ties like they are hardened veterans in their fields of work. It was so realistic for the most part, so even little oddities like that really derailed things during some important key moments. 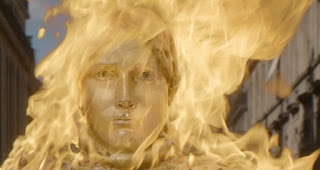 Technically speaking the film excels in every department. From awesome steadycam shots throughout that glide along during the characters setting up for their act of terror, to the eclectic mix of tracks and original score give way to the various mentalities this very mixed group of young adults have. Couple that with some of the best editing I've seen in some time during the last 15 or so minutes and you have an absolute beast of a stimulating sensory experience.

I wish the same could be said for the plot or motivations of some of the players involved. Some made total concrete sense on why they were there and what they were hoping to achieve based on their acts and others just seemed to be there, sometimes confusingly so as if they were just along for the ride. Perhaps that is the point. People don't want to listen nowadays and sometimes others do extreme things in an attempt to just be heard. A sad reality that only seems to occur more every year, anywhere in the world. A very good film that I need to further explore for a better appreciation. Where it stands now, I certainly recommend it.

The good folks at Grasshopper Films have given Nocturama a U.S blu-ray and DVD release. The transfer is crisp and clear on both the visual and audio front, although I'm no expert in the field, it looked and sounded great to me. On the supplement side of things, the disc features a lengthy interview with the director that addresses the creative process and drive behind the film, as well as two additional short films by the filmmaker: Cindy: The Doll is Mine (2005) and Sarah Winchester, Ghost Opera (2016). Rounding things out with the release is an essay included in the accompanying booklet by critic Dennis Lim, and a lengthy director's statement, which covers similar ground to the aforementioned interview. A very solid release that comes highly recommended.
Posted by Josh Parmer
Email ThisBlogThis!Share to TwitterShare to FacebookShare to Pinterest
Labels: Grasshopper Films, Social Commentary, Thriller