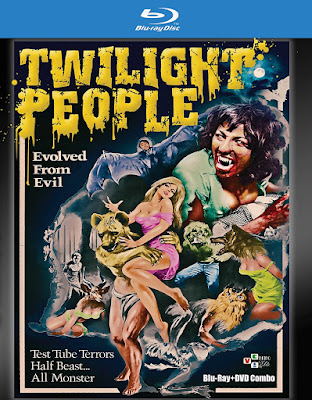 The Island of Dr. Moreau is a classic in its own sense, thanks to a fantastic concept and story by the iconic H.G. Wells, but it’s a tale that sometimes finds itself being translated oddly to film. Many of the official film adaptations of the story have both their fans and detractors, depending on which version you watch it leans heavily one way or the other, but there is one thing that the Dr. Moreau story has inspired that is of particular interest to readers of this site: all of the knock offs in B-cinema. The Twilight People, the focus of this review, is one of those knock offs. Featuring some fun animal/people mashups and a brisk pace, the tone and feel of this 70s film will appeal to those who love to dig through the annals of cinema history for the strange and offbeat. For the rest of the cinema watching community though, it might be a harder sell thanks to a thin script and mixed execution. If anything, the actual restoration of this film and release on Blu Ray is much better than the film itself and for those who do find The Twilight People on the radar, it will be a solid addition to their collection.

With films of this nature, more obscure ones that exist even on the fringe of cult cinema, it’s hard to know exactly what to expect from them. It could be complete exploitation trash or it could very well be a misunderstood gem. The Twilight People was one of those films that lies between the two ends of the spectrum for me. Outside of reading the synopsis on the back of the case (and seeing that Pam Grier had a small role in it) I was something of a blank slate going in and, thus, is the reason that I felt extremely mixed by the film itself. The Twilight People is certainly B-cinema, being as it was at least co-developed by Roger Corman before it went with one of his ex-partners, but it struggles to be something much more serious than just silly entertainment.

Right away, it’s obvious that the film struggles to find a sense of purpose outside of its plot points and broadly painted characters. After a somewhat perplexing series of underwater shots, our hero, played without much charm by John Ashley of low budget film fame, is kidnapped by the devious scientist and forced to help him with his experimentations on a remote island. Already by this point, it’s obvious that this film is going to struggle with the basic foundations of building a film as we are given a handful of characters that feel bland and then watch them try to build some kind of on screen chemistry that never garners much of a spark. Granted, there are moments where one can see the A-grade B-movie that is peeking through, particularly with Jan Merlin as the film’s evil henchmen or even in the manner that the animal people give it their all to act through the fun (but low budget) effects, and in that regard, it earns some merits for the effort. It does become more effective as it goes thanks to a second half that is almost exclusively a chase sequence through the jungle. It’s just too bad that the main plotting and narrative struggles to find its footing to deliver on some of the promises of its concept and even when the film finds success it feels a tad hollow.

With the right expectations though, there is some fun to be had in The Twilight People for its low budget elements and striving reach for something bigger than it can deliver. It takes a bit too long to get the film into its groove for the second half and the film suffers immensely from its lacking chemistry, but B-cinema fans will still have fun with it...warts and all.

Written By Matt Reifschneider
Posted by DarkReif at 9:01 PM