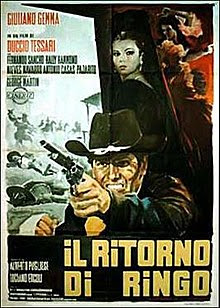 Expectations can be the best and worst thing to bring into a film for the first time. Particularly when one is under the impression that a film is a sequel and, surprise, it’s not. This kind of expectation and whiplash change of impression constitutes the first 30 minutes or so of my experience watching The Return of Ringo. Partnered with another film called A Pistol for Ringo in the new Blu Ray set available from Arrow Video, they are both directed by Tessari and both star Gemma in the lead role as a character called Ringo along with a substantial amount of the same cast too. Perhaps I should have done a little research before digging into it to set my expectations up properly. However, after watching the first one and enjoying it immensely, I leapt into The Return of Ringo expecting more of the quirky anti-heroics of Ringo as he continues to wander the desolate lands of the wild, wild west.

The film that greeted me was not at all in the same tone and the hero, once again played by Gemma and only haphazardly referred to by the nickname of Ringo in a few sequences, and he was not at all the same character. Once the shock of this discovery wore off though, allowing me to restart the film with more applicable expectations, I was able to judge The Return of Ringo on its own merits. While the film does struggle to match the balances between character and narrative that made A Pistol for Ringo so effective, it does make for a surprisingly solid watch on its own. Loosely built on the same idea of Homer’s The Odyssey, this non-sequel takes a somber tone as our hero, returning from the Civil War, finds that his home and his finance have been overrun by gangsters. To investigate further, Ringo – or as he’s called through most of the film Montgomery Brown – goes undercover to see what happened and what he can do to right the wrongs to the town and his family.

The Return of Ringo is a rather somber and dark film on at its core and thanks to a rather effective performance from Gemma, it succeeds in showing how a man how saw his country torn apart in the Civil War comes home to see that his own family has similarly been shredded. It’s not a conceptional parallel that the film lingers on (something that I would have liked to see it run with a bit further), but it starts the film on the right foot to create the effective character arc for Brown that drives the film. The narrative doesn’t try to completely hammer down the somber tones though and occasionally adds in some fun humor, thanks to a strong secondary cast, and by the time that the third act rolls around it takes a turn for the positive as our hero finally starts to take action instead of continually figuring things out.

If anything, The Return of Ringo just occasionally plays things a bit too upfront with its melodramatic swings and obvious plotting choices. One scene in particular, where Brown makes a discovery about his family and finance in a small grove, Morricone’s score is too ambitiously used to force the emotional resonation on the audience and perhaps a bit of silence would have been far more impactful. This is just one of many examples where director Tessari tends to over emphasize, when it’s shown previously – in the opening sequence where Brown first learns of his family’s predicament on the way home from the war, that he is capable of allowing the audience to sit with the feeling instead of punching through it.

Still, when it comes to the spaghetti westerns that I have seen, The Return of Ringo is quite entertaining and the idea of transforming the elements of The Odyssey into the harsh landscape of the Italian western is worth it. There are some fantastic performances, Tessari has plenty of visually great sequences to add to the mix, and the subtle parallels within the narrative add some solid layering. The best thing to do when going into this film though is to not assume it’s a sequel to other film in this set. Truly, that’s the best advice I can give you. Take the film on its own and you’ll find quite the enjoyable western experience. 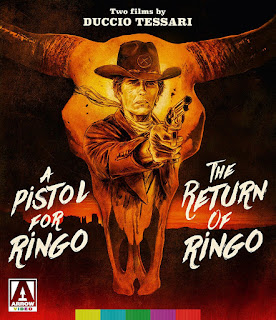