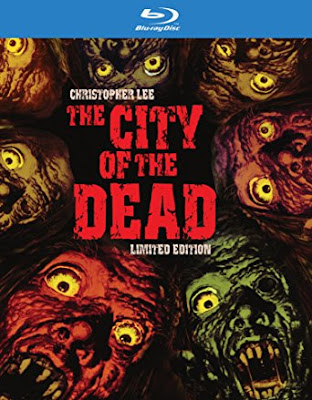 City of the Dead was one of those films that would occasionally pop up in my peripheral vision as a cult cinema consumer, but it was not one that I would actively seek out. Even with a huge name like Christopher Lee attached to it, the lacking attachment of any of the bigger studios of the period (Hammer, Amicus) certainly had a part to play in my hesitation to leap into it, but the latest Blu Ray release from VCI perked my interest. While City of the Dead does hit some of the necessary Gothic elements that one expects from a film of this caliber, it’s also not a film that finds itself uplifted into the upper echelon of the genre. Still, fans of the style and those looking for a decent classic horror film to burn some time with will be fine with what is on display here - although it does tend to be somewhat forgettable ultimately.

Much of the film’s issues arise from its brisk pacing and lacking sense of urgency as a goes on. It starts off effectively enough, introducing the audience to an ambitious student of history as she takes the advice of her teacher, played with the usual intensity by Christopher Lee, to investigate a supposedly cursed town called Whitewood where a witch was supposedly burned at the stake hundreds of years ago. It builds some intriguing mystery as she explores the fog laden town with its ghostly vibe and off beat patrons and the first act seems quite promising. The style is classic British gothic, invoking a bit of the classic Universal monsters era at times too, and despite the obvious attempts of British actors trying to sound American for the setting, the set up works.

However, it’s quickly apparent after the initial ‘twist’ to the film that City of the Dead didn’t quite put enough time into developing many of the secondary characters to sell most of its second half. It becomes a rather predictable affair, stumbling along into the third act, and in doing so loses a lot of its momentum as it navigates and replicates many of the sequences in the first half for new characters. The performances are decent, in particular Patricia Jessel tends to steal a lot of sequences as the head of the Raven Inn in this cursed town, and the visuals get the job done with just enough flair to overcome the obvious budgetary constraints. Still, it’s hard not to be lulled into a kind of familiar drone as the film sticks to the tropes and plays things safe. Even the role for Christopher Lee, which amounts to a large cameo more or less, seems to be added to give the film a little bit of flavor since the rest tends to be bland.

The release itself for City of the Dead is impressive, especially for the rather cheap price tag that it is currently running for online. The new 2K transfer and restoration is crisp and keeps the black and white visuals of the film intact while the inclusion of both an interview and a commentary track by Christopher Lee is what is going to truly attract collectors who want to add the film to their collections.

City of the Dead may not even be close to being one of the better gothic horror films from the era (either as a ghost or witch story,) but this release can’t be beat for the price on Blu Ray. It’s a decent watch, easy to consume and not offensive by any stretch of the imagination, so for what it is City of the Dead works and fans of the genre will not regret digging into either the film or the release. There are better ones out there, but for collectors and completionists it’s one that will fit right in with their purchases.