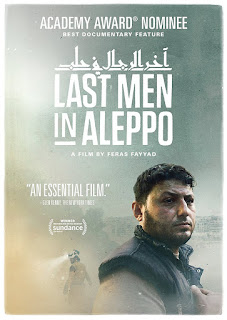 Featuring: Khaled, Mahmoud and Subhi and the other brave people of Aleppo

This was an experience I wasn't ready for.

I knew about the issues going on in Syria and had seen various articles and videos scattered about on the web, but to be put right in the middle of the chaos, to see the day-to-day lives of these people, it shattered my heart into an uncountable amount of pieces. I am thankful for where I live and my surroundings but to not even feel for these people, which some don't, is just unfathomable and disgusting. I will try and not let my beliefs get in the way of the work here, which frankly is the most singular powerful event I've witnessed with my journey through cinema.


Last Men in Aleppo focuses on the lives of a few select members of The White Helmets, a group of men throughout Syria that help salvage fellow victims and save lives of those caught beneath the bombings and blasts of many attackers of various countries. These men: Khaled, Mahmoud and Subhi, to name a mere few, drive around Aleppo and neighboring areas digging out these helpless souls trapped beneath the rubble. It's absolutely devastating seeing them pull these children, women and men out, some still here, some gone, some ripped to shreds. Tears aren't enough to express the deep sorrow felt for these innocent lives.


The film itself is masterfully crafted. Again, it puts you right in the middle of everything happening. There were three cinematographers listed in the credits as I'm sure the crew involved in the making were quite scattered geographically. The cameras used switch consistently between DSLRs, Go-Pro's, cellphone footage and many things in between to give us witnesses the most absolute raw and legitimate truth as possible. It frankly doesn't matter how it was captured and presented but the way it is edited and shot adds a certain dynamic that I hadn't thought of until a long break to reflect back on everything.

Additionally, the flow of the narrative is nicely structured. It's not just a bombardment of devastating footage, we get moments to breathe, though far and few between and it takes time to show us the personal workings and foundations of these men and their families. Khaled and his daughters absolutely stole my heart every moment they shared together and really helped further cement the humanity this film seeps with its every frame. I think this will help people out there who have troubles in their thoughts towards these people and maybe it will open the hearts and minds of these soured individuals.


If there is one film every person in every corner of this planet needs to see, it's this one. Not only does it showcase one of the biggest ongoing tragedies in humankind's existence, it teaches that we aren't as different as we maybe think we are. This story truly shook me to my core and has me hoping that things are done for these beautiful people and maybe, if we are lucky, hardened hearts around the world will be changed and for the better. My few words do this monumental documentary no justice, so if you've read this far, seek this out immediately. It has the potential to change lives and save them.