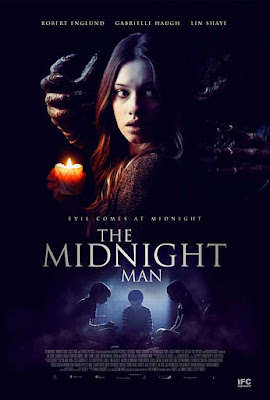 The reason why I’ve called you into my office today is that, well, to put it nicely, we need to talk about The Midnight Man. Recently, there has been some speculation that The Midnight Man could have been a good movie. Really, there is potential here. It has a fun monster/game concept at its core, it features a couple of roles for horror elite actors, and the production value is sharp. The problem with it is not how it looks from the outside. It’s the inside. The Midnight Man has one of the thinnest and most illogical scripts I’ve had the pleasure to experience in a long time, the performances of the two/three leads are perplexing at best (jaw droppingly awful at worst,) and the film has a confusing tone. In all honesty, I spent the entire run time of the film desperately trying to figure out if it was meant to be funny. If it was, I didn’t laugh. If it wasn’t, boy, I sure feel awkward that this is how it came out.

Still, the film has some solid elements to it, including some fun special effects, the previously mentioned production values like the great use of the house as a setting, and the visuals in moments are fun and creepy. Naturally, Lin Shaye and Robert Englund are bright, shining beacons in the film too. The problem remains that the script, dialogue, and lead characters are just terrible. Nothing really makes sense and no amount of silly monster moments or bat shit crazy Lin Shaye can right that sinking ship. The Midnight Man is a problem and, for these reasons, I think it needs to be expelled. 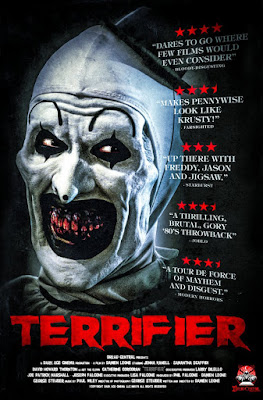 Killer clown films are a dime a dozen normally and after the massive success of the new It film in the box office, the explosion of silly, low budget knock offs is going to be a tsunami flooding the straight to home video market. So, for the time being, it’s probably necessary to vet a lot of the killer clown movies that you come across until the fad dies down. Except Terrifier. Terrifier is freakin’ fantastic. No need to vet.

What sets Terrifier aside from much of the other killer clown films is that, even though the film is fairly simplistic in its concept, it has loads and loads of style. On one hand it’s a massive throwback to the visual style and look of the 80s horror film. Fans of older horror are going to immediately lock into this aspect of it as it uses the perfect coloring and lighting schemes and slathers them in a fantastic synth heavy score. Its low budget is maximized to deliver scares as it keeps its villain, Art the Clown, as a kind of pure source of evil with seemingly no true motivation for the terror he inflicts on the few protagonists trapped in the semi-abandoned building where the film takes place. The performance of the clown is absolutely terrifying and, yet, still strangely hilarious on a very, very dark and creepy level. The use of likable and humane feeling main characters helps to create a balance to the villain and it works to develop effective tension.

On the other hand, what makes Terrifier more than the usual throwback horror is that there is certainly a modern and devastating nihilistic tone that goes with the older style. Even though it has a viciously dark humor to its proceedings, the film does not hesitate to spin some intriguing elements into the predictable elements of its narrative. It toys with its audience and occasionally spins things out in unpredictable ways. It’s clever and worthy of a gander just to see how this mixture works. 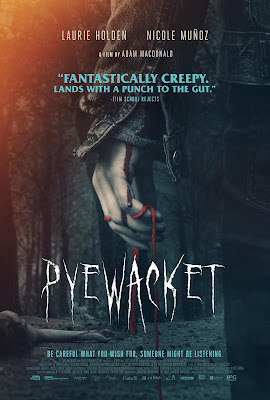 Backcountry was a film that came as a huge surprise, utilizing its realistic and grounded elements to provide a vicious kind of horror that seemed to sync with horror fans in some serious ways. When the director of Backcountry came back with his follow-up, Pyewacket, I was hesitant to see how his style would carry over to a witchcraft film. To be fully honest, it’s easy to see a strong contingent of horror fans biting back on this film too with his stylistic approach to the material. This is a film that fully embraces the super slow burn approach that has been popular in horror recently, grounding its story in a simplistic reality, and giving it a vague sense of existential dread that parallels the mother and daughter relationship that is pushed the brink by the stark and sudden changes in their lives.

It works impressively though through its simplicity. Director Adam MacDonald slathers the film in this sense of unease, a pain and emotional smolder that drives the characters, and the subtle approaches to the witchcraft defy the usual tomfoolery and jump scares that have come with the genre in the mainstream. However, the film does take a very long time to develop a sense of momentum and it’s not until the last 20 minutes or so that things really start to take shape in more traditional horror ways. At times it is reminiscent of the vague and existential dread of some of the classics of J-horror (particularly in one very intense sequence in the final act) and for those interested in that aspect, it’s definitely worth a glace.

For horror fans that love the atmospheric and minimalist style of horror, I cannot recommend Pyewacket enough. It’s heavy with the sense of unease and dread, but it does take a very long time to develop and there will be fans that dismiss it for its lacking sense of early urgency. For this reviewer, it nails the style and is easily one of the best horror films of the year.

Written By Matt Reifschneider
Posted by DarkReif at 9:24 PM