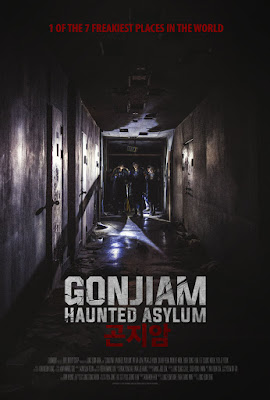 The advent of the found footage horror movie certainly kickstarted one of the more divisive movements in the genre and its lasting effect remains intact - even if the style is finally waning from the mainstream conscious to not over-saturate the market. However, there are always a few of them that pop up every year and the first one to cross my path in 2018 is, believe it or not, a South Korean film. Over the last handful of years, the Korean market has proven that it can drop some of the best horror around (The Wailing and Train to Busan come to mind) so there was hope that perhaps the strong cinematic qualities would carry over to a found footage horror film. The execution in Gonjiam: Haunted Asylum is decidedly mixed though and, while there are some admirable qualities to be found in the film, it’s reliance on the found footage tropes undermine the film ultimately and the film has serious foundational issues. It’s an entertaining experience overall, but not one that is going to shake the market like the last few South Korean horror films that have made it to North American shores.

Gonjiam: Haunted Asylum struggles most in trying to kick off its story. The introduction to our team of ghost hunters, some of them guest stars on a show that is going to be live online to generate revenue from ads, is about as generic as it gets and the inclusion of obvious “fun sequences” to generate chemistry almost derails the viewing experience. The lacking development of any of the characters, outside of bios and exposition in the opening 10 to 20 minutes is the most haunting thing in the film honestly. It trails the rest of the narrative like a curse and prevents the film, even at its heights, from ever reaching its full potential. By the time things start to go real crazy, it always feels a tad hollow.

Yet, against all odds, the film does get stronger as it goes thanks to decent performances and an impressively executed second and third act that spins the found footage tropes in a uniquely effective manner. A viewer’s patience is rewarded because the film starts to really cook about 45 minutes into the run time and it really flies from that point. Even when it is obviously ripping off the tropes from other classic found footage horror films, including a sequence where two characters attempt to escape from the asylum only to find themselves lost in the woods and going in circles ala Blair Witch Project and its many knock-offs, Gonjiam somewhat twists it in some fascinating ways to maximize the tension and inject some classic Asian influenced horror into the usual found footage style. At this point the scares are plentiful, the atmosphere is abundant, and the editing and sound design is clever in punching the audience with some diverse jump scares and tension building.

If it wasn’t for the forced and generic first act that fails to create any real character connection with the audience, Gonjiam: Haunted Asylum could have easily been one of the best films of the year. When the horror starts to flow, the film is absolutely terrifying and clever in its use of the found footage tropes that it is built on. It’s just too bad that the film takes about half of its run time to find its footing and truly sprint to the finale. For horror fans, Gonjiam: Haunted Asylum ultimately delivers the goods through its second and third acts and it saves the film from a disastrous first act. It’s enough of a maximization of the style to get a recommendation, but it’s hard not to ponder just how brilliant it might have been with a more developed core…

Written By Matt Reifschneider
Posted by DarkReif at 9:40 PM