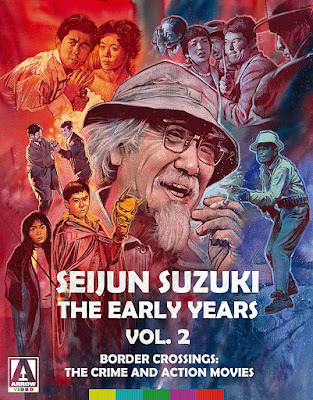 Even though Seijun Suzuki has been heavily recognized as a key artistic figure in Japanese cinema that influenced some of the great modern directors, so many of his films have been left in the shadows of time for western audiences. More recently, Arrow Video has really stepped up in this regard by digging in and getting some of his classics and overlooked early films the releases they desperately deserved. Not only did they drop the iconic and artsy Taisho Trilogy, but they have gathered together ten of his early films into two box sets (limited to 1500 copies each) for collectors. For the second volume, under the title of Seijun Suzuki: The Early Years Vol. 2 - Border Crossings: The Crime and Action Movies, Arrow gathers together a slick mixture of differently styled films to cover a lot of the tones and style that Suzuki used as a hired gun for the Nikkatsu studio through the late 50s and early 60s. This review will briefly cover the five films in this set, but for those who are even remotely fans of Nikkatsu, Suzuki, or cinema from this era of Japan then this is a no-brainer purchase. 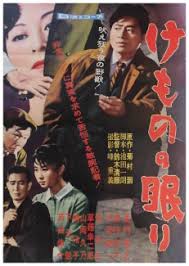 Kicking off this box set right, The Sleeping Beast Within is exactly the kind of film I was hoping that this box set would contain as an early Suzuki film. Following the daughter of a successful businessman and her journalist boyfriend as they search for her father who quickly disappears after his return to Japan from a long stint in Hong Kong, The Sleeping Beast Within balances the use of the noir mystery with just enough of a social commentary to give it some depth as it starts to explore the reasons behind the plot. It significantly helps when the leads are charming, particularly Nagato Hiroyuki as the boyfriend who truly drives the story through most of its narrative, and Suzuki maximizes a lot of the tension in many of the second half sequences to make up for the film’s rather predictable plotting. There are moments, particularly in the final act, that the film felt like it wanted to go even further with some of its thematic threading and if this movie was made later in Suzuki’s career he would have hammered that home I believe, but once those are out in the open it’s hard not to want to have seen more of it. Still, for noir fans or those of this era of Japanese action cinema, it’s easy to recommend The Sleeping Beast Within. It moves briskly, it has some great performances, and it has just enough depth to give it some solid replay value. It’s perhaps most fitting that Smashing the 0-Line is doubled up with The Sleeping Beast Within on the same disc in this Seijun Suzuki box set by Arrow Video because they do share quite a few traits and work well as a double feature. This film focuses on two journalists and how their lives continually intersect as one of them, played with a cold and effective demeanor by Nagato Hiroyuki, continually pushes his way into the criminal underworld with some deceitful tactics and leads both his rival journalist, and sister, into harm’s way. Granted, as exciting as that sounds, Smashing the 0-Line does essentially play it as a more subtle and straight forward thriller than the truly heavy morale tale that it might have come across, which is perhaps the biggest reason that the film tends to have mixed reviews. Still, it’s hard for me not to give the film the benefit of the doubt as it does take some sly shifting maneuvers with its narrative to toy with the audience before ultimately changing gears into the final act. Like many of Suzuki’s early films, Smashing the 0-Line does suffer from not going far enough with some of its thematic material, but even then, the execution is just clever, dark, and intriguing enough to be one of my favorites of the set. 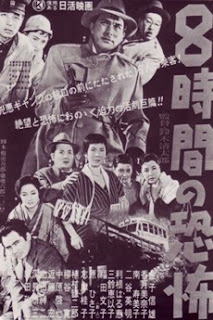 Generally speaking, of all of the Seijun Suzuki films that I have seen thus far, Eight Hours of Terror is one of my least favorites. Most of the issues that arise in the film have to do with its somewhat sporadic tone, something that Suzuki would certainly refine with each subsequent film that he would craft, but here the quick changes from darker thriller tones to comedic banter between the broad stroke characters to its dramatic and sly socio-political commentary are rough around the edges. When it’s played right, the mixture is fun and effective, particularly in its themes about how people from all walks of life have to work together in the face of adversity (with an overzealous topical point of a baby’s safety that’s throw in to hammer at the symbolism of “think of the children!”) When the mixture is off though, it’s a rough ride with the strangers on this bus ride through treacherous terrain and even more treacherous bank robbers. Fans of Suzuki will certainly see hints of his style that peak through the seams of what is a relatively generic thriller, so for them this is a film worth the watch. 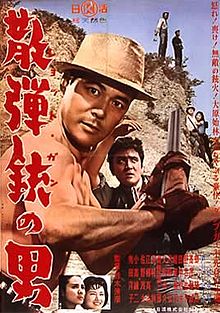 One of the great elements of many of these early Seijun Suzuki film is how they had an ability to create just enough of an artistic element within his hired gun films. The Man with a Shotgun, while certainly not one of his best films from a technical or thematic standpoint, does encapsulate this approach to the films. The Man with a Shotgun is pulpy fun, showcasing Suzuki’s love of the western genre by spinning it into a story about a wandering (and armed) hero who stumbles into a small lumber town only to discover that things are very much awry. The film occasionally slides into predictable territory, but the use of dynamic settings, splashy characters, and efficient pacing - all with a certain wry sense of humor - make it a remarkably fun film to consume. The Man with a Shotgun may not leave the resonating emotional effect that some of his later and more challenge films do, but as a pulpy early 60s Japanese action flick it hits all of the right buttons. 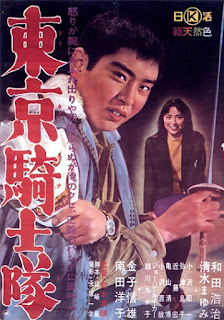 One of the problems with a director that is as creative as Seijun Suzuki working in a gun for hire system like Nikkatsu is that some of the films he had assigned to him are simply problematic from the ground up. Such is the case with Tokyo Knights. The film has a decent concept, as a young student finds himself thrust into the shady world of his father’s business by an untimely death and must balance the life of being a talented young man with that of the larger concerns of his family and their business, but the film is likely to give its audience some outlandish whiplash with all of the tones as it jackknifes its way through a variety of genres. Suzuki slathers the film in a lot of great visuals, particularly as it starts to shift towards the thriller tones of the third act (a colorful lit sequence of the villains discussing their options in a car and the Noh mask theater stood out), but the rapid fire slapstick humor, the plodding romantic subplots, and an almost untouchable hero - he is the best at all sports and arts! - make the film feel unbalanced, unguided, and spastic at times. There are moments where one can see a different film underneath the one being presented, darker tones and the familial drama strike home as pretty effective, but the one being shown is just too sporadic to be effective. Tokyo Knights is easily the weakest entry in this set.

While the quality does vary between films in this Border Crossings set, it’s one of those collector editions that is completely worth the purchase. As a bonus to the five films included, there are a few special features that act as a sweet icing on the cake. The box set artwork is beautiful (matching that of Vol. 1), Tony Rayns delivers some thoughtful interviews, and the human encyclopedia of Japanese cinema, Jasper Sharp, delivers a robust and very detailed piece of writing for the booklet along with another brilliant commentary on the film Smashing the 0-Line. If anything, the one thing that I wished is that Sharp did more commentary tracks on the films as I find his work with Arrow on their releases is some of the best there is to offer.

As a final statement, don’t wait to pick up Seijun Suzuki: The Early Years Vol. 2 - Border Crossings: The Crime and Action Movies because it’s limited and it’s not worth putting off until the last minute. The set is a statement piece for collectors to showcase on their shelves and the five films included provide a plethora of entertainment options.