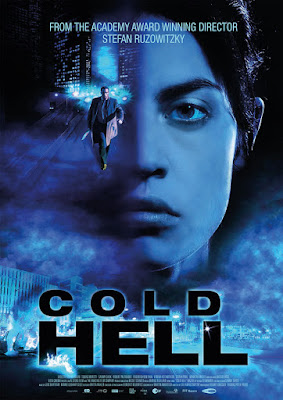 Shudder has been grabbing some unique films as of late, proving that they are a force to be reckoned with when it comes to genre streaming and exclusive releases. The German film Cold Hell, released under a variety of other generic titles, is one of their most recent surprises. With almost no expectations going in, Cold Hell comes ripping out as a stylish blend of various genres and punches its viewer in the face with a unique and layered cinematic experience. It’s executed on an impressive level and the blending of genres is naturalistic and effective. Oh, and it also features one of the greatest heroines to root for that I can think of in modern horror.

There are two key parts to why Cold Hell works so well as a film. The first part is how director Ruzowitzky ably navigates blending the styles of various genres into a cohesive whole. The film starts off with a mixture of noir and giallo as it builds up our female protagonist, played with a burning intensity by Violetta Schurawlow, and introduces us to the killer on hand, and Ruzowitzky handles it wonderfully by caking the film in a rainy and neon light glazed haze. As it unravels though, the film starts to shake off those tones for a more traditional cat and mouse action thriller, punctuating it with intense and brutal violence. The tones shift as the genres do, but the manner that it smoothly slides through those is impressive and it balances the style, tones, and detailing in a naturalistic way.

The second part is the strength of its layering in the script and execution. Cold Hell is not a film that is all style and no substance. Schurawlow's Ozge is a deep and effective character to follow, particularly in how it portrays the mistreatment she continually receives from the male counterparts in her life, and the detective that starts to help her out is a great parallel to her own character details and the mystery that is being fed to them. The film is not one dedicated to the twist, like so many thrillers and giallo inspired films, and instead uses its depth of characters and situation to drive to the narrative which makes it a quite fulfilling cinematic experience.

It's not often that a genre bending film like Cold Hell comes along and truly blends the horror and action thriller is such an effective manner. Especially one where its lead is such a deeply connected non-victim that an audience will root for as she brings some serious violence and ass-kicking qualities to the game. Cold Hell is an emotionally resonating, perfectly paced, and refreshingly dynamic film and it's worth seeking out. It's definitely one of the best genre films of the year.