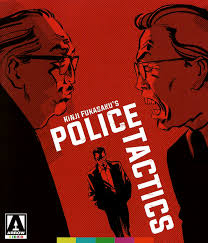 There are a lot of intriguing nuances and slightly unique elements to each of the Battles Without Honor and Humanity films. While I tend to be in the minority in my critiques of Proxy War and its rather slow build and laser like focused dialogue, after seeing its direct sequel Police Tactics, it is understandable why people will stand up for these last two films as the best of the franchise. Police Tactics is an ambitious entry into the yakuza focused franchise and one that really brings the series full circle. It takes all of the build in Proxy War and wraps it up with plenty of bloodshed and tension breaking twists that really finalized what this franchise is all about – and it comes off as one of the best entries into the series.

With the various yakuza gangs now aligned with larger criminal organizations, Hirono (Bunta Sugawara) finds himself on the frontline of a war on the verge of erupting. However, civil unrest with the bloodshed and deplorable tactics of the yakuza has placed extra police focus on their comings and goings and so the two sides will have to be increasingly careful and underhanded in how they manipulate the landscapes around them to play into their hands.

In the bigger scheme of things, most people reading this probably already know that there are five films in the Battles Without Honor and Humanity franchise. If you don’t, then now you do. Police Tactics, however, definitely carries the tone and atmosphere of a final film and the way that the film wraps up the characters and plotting has a much finalized feeling to it. It’s obvious that it was meant to be the final film. All of the time spent with the various characters and plots certainly pays off with some bloodshed, violence, and character arcs to punch the series through – without necessarily losing the more dramatic and plot heavy tone of the third film. It’s true ace in the sleeve though is how the film seemingly comes full circle in the final minutes of its play time leaving the world changed, but some of the characters in the same (or worse) positions than when they started at in the first film. It’s this thematic parallel that worked the best for me and made this series so special. Not to give too much plotting away, but the journey is worth it for how Police Tactics plays itself out.

Police Tactics, however, doesn’t necessarily live up to its name as it continues on in the slower burn and gritty pace that has distinguished this series from other yakuza films of the time period. In a way, I somewhat expected the finale to be even more explosive as the various gangs start using the police to wage war on one another, but the film remains fairly level headed in its approach. Fukasaku continues to use the same style of the series with its hand held intensity and in-your-face attitude visually, which only makes sense especially when one realizes that this one is so closely connected to the previous entry. Once again the film is carried by some stellar performances and a knock-out combo of enigmatic narrative and impressive score. Thus, if you enjoyed what Proxy War was dealing out then you’re more than likely to enjoy what Police Tactics sweeps away as our anti-heroes and villains lay down some of their most drastic hands yet.

At this point, I’m rather curious to what the fifth entry has in store for me considering how well Police Tactics finalizes the story of Hirono and the various gang members that have repeatedly (and briefly) lived in the world of Battles Without Honor and Humanity. While I tend to still prefer the first and second films over this one, it’s hard to deny that Fukasaku didn’t capture the story he wanted to tell in a very dynamic fashion with this one. Perhaps as a standalone feature it doesn’t quite seem as effective as it might have, but the second part to Proxy War and a sort of wrap of this latest chapter it’s effective, vibrant, and vicious which is exactly what this franchise has always been about.