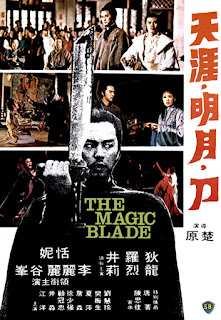 When it comes to the Chor Yuen wuxia films of the 70s for the Shaw Brothers, The Magic Blade usually comes highly recommended from those in the martial arts community. My first viewing of the film a few years ago left me a bit cold actually, as the film (like many other Chor Yuen wuxia films) tends to throw the viewer down into the middle of a fully developed world and expect them to keep up with its sprint like pacing. However, after seeing the film again just a few days ago in theaters, I felt like I was able to enjoy it much more for what it is versus what I wanted it to be. Instead of an epic and emotional tale of a man’s plight to dethrone a martial world super villain, I was able to enjoy it for its rather campy approach and off the cuff style. The film is rarely as good as the claims (or even as some of Chor Yuen’s other films), but the combination of its sprinting pace, eclectic narrative, and outrageous action set pieces it’s easy to love it for how entertaining it really is.

Fu Hung Hsueh (Ti Lung) has waited a year to finally face one of his rivals Yen Nan Fei (Lo Lieh). Unfortunately, their duel to the death is interrupted by a slew of nasty assassins. As it would turn out, a villainous (and mysterious) champion of the martial world wants them both dead and the only way they can stop him and his Big Five is to find the legendary Peacock Darts.

Oh, 70s wuxia. Seriously, it’s hard to take them all that seriously despite the fact that they are performed and executed in the utmost of seriousness. The Magic Blade, which of course doesn’t really include the titular weapon, falls right into that same category of serious outlandishness. Within the first 15 minutes, the audience is introduced to so many characters and situations that any sane person has to laugh it off in any attempt to keep up. The film never slows down from there. The Magic Blade rapid fire punches the audience with assassin after assassin, mini-quest after mini-quest, and battle after battle until it becomes a blur of action and Ti Lung glaring at various characters in surprise. This really does allow the film to be wholly enjoyable though as it never stops to let the audience think about what’s happening and just plows into the next fight or conflict. It helps that Chor Yuen really works the fight dynamics here too with plenty of versatile battles from a one on one duel to a multitude of traps and ends with an epic five against one fight. For those looking for a martial arts movie in this aspect, you can’t go wrong with The Magic Blade.

There is a cost to the film’s relentless pacing and outrageous fight work though and it happens to be depth to the characters and plot. As I mentioned above, Chor Yuen has a tendency to make wuxia films where the audience to thrown into the middle of an already developed world and this is how The Magic Blade works. Unfortunately, the film doesn’t really grasp onto a lot of the intriguing characters that litter this world. The latter half of the film really builds on the heroic and pure qualities of our hero Fu Hung Hsueh (including a rather heartwarming scene where he helps a woman in need with some food), but it’s some of your basic wuxia material and it’s nothing too deep. The other characters, including an arrogant partner with Lo Lieh, end up being more gimmick and broad stroke pieces in the massive chess game of the plot. The romantic subplot is dropped completely in the third act and most of the villains and helpful side characters are walking caricatures. Within the plot, it works on the bare bones of the story, but it’s nothing to get too worked up about. The plot itself…well, it’s plot twist after plot twist after plot twist and that’s fun, even if it rarely makes sense by the end of the film.

The Magic Blade is far from Chor Yuen’s best wuxia film for the Shaw Brothers (for that I still say check out Death Duel), but it might be one of his more entertaining ones and a sure fire cult classic due to that. It runs on the power of its strong casting and the relentless pace off its narrative. Just make sure to run with it and not try and think about it too much…otherwise you’re likely to miss something fun that’s happening onscreen.

Written By Matt Reifschneider
Posted by DarkReif at 9:34 AM