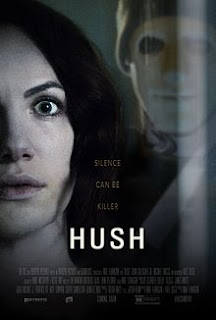 When it comes to modern horror, Mike Flanagan might be one of the best and freshest voices in the industry. His first two films were the atmospheric suffocation of Absentia and the shockingly effective time blending of Oculus, films that rocked their concepts and effectively executed what could have been questionable ideas into modern classics. This is the reason why I was initially stoked to dive into his spin on the home invasion film Hush. Now, the fact that it was seemingly kicked straight to Netflix did give me hesitation, but don’t be afraid because Hush continues the trend of Flanagan nailing the horror genre down to a science even if the basic foundation is nothing all that original.

Maddie is a fiercely independent young woman, focused on her career as an author, and living in a rural house with only her nearby friend as a social connection outside of the internet and phone. She also happens to be deaf and mute and it makes her stronger. However, one dark night she is going to have an unwanted guest. An unwanted guest with some malicious intents.

The home invasion sub-genre of horror and thrillers has been a bit saturated in the last handful of years. The genre is many decades old already, but with the continued success of films like The Purge, You’re Next, or The Strangers, it’s not going anywhere soon. Unfortunately, outside of the execution of a specific film, the genre is run a bit thin when it comes to concept and formula. Hush, at its weakest, does run the gauntlet of the formula with its masked intruder, character arcs, and its vague narrative. In this manner, as the film sort of jogs through the motions of a trapped protagonist rising up to take on the vicious killer with tricks and traps, it can be a bit hum drum. Even with the twist of having a deaf and mute protagonist, Hush plays things a bit safe in this sense as it just pounds home a lot of the same instances and plot developments that any coherent horror fan will have seen time and time again. With a shorter run time, it’s not like the film is going to throw a lot of massive curve balls at an audience like other films in the genre have attempted to do.

This is where director Mike Flanagan shines though. The man has knocked the ball out of the park with films about possibly imaginary giant bugs and a killer mirror, so giving him a well-worn concept isn’t actually a detriment. He kills it on this one too. Hush is slathered in his patented vague and well-paced atmosphere, utilizing the modern muted tones of color scheme and the simplicity of the film to allow it its own effectiveness. He does not use the deaf and mute aspect in the bombastic ways I would have assumed for a film with some directors gunning for some ridiculous sound design or anything like that. It’s never treated as a big gimmick outside of building some serious tension in a handful of scenes and this is where the film really works. The film even ably addresses the technology factor that so many home invasion films struggle to make effective. The audience actually gives a shit about the heroine, even with the limited initial build for her character, and the villain is both fascinatingly creepy, charming, and shockingly evil to give the film a solid balance of good versus evil. The tension, thus, is damn effective as it throws in some slick narrative speed bumps and a few fun home invasion set pieces.

At its foundations, Hush is essentially just another home invasion flick and if you don’t buy into the atmospheric style of Flanagan, then you won’t be hooked by this film. On the flip side, if you do grab onto the simplistic and effective style of the film then it’s a sure fire cult classic in the making continuing Flanagan’s already impressive resume of horror films. Buy into the tension and you won’t regret it with Hush.

Written By Matt Reifschneider
Posted by DarkReif at 9:26 AM