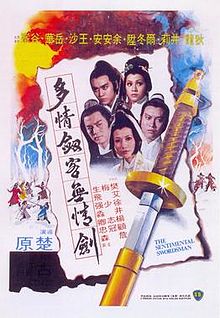 While Chor Yuen has never really been my favorite director when it comes to Shaw Brothers films, I seem to find myself coming back again and again to a lot of his material. His ability to craft some dynamic (and ultimately insane) wuxia films makes his films a lot of fun to watch, even when they are of a lesser quality. The Sentimental Swordsman falls exactly into this category. The film is powered on some very silly concepts and made entertaining by its own outrageous moments, but it’s hard to overlook a lot of the deeper flaws of the narrative and the immense world building present. With a stacked cast of iconic Shaw Brothers regulars, The Sentimental Swordsman is going to have its following just on a fan level, but it’s a hard film to swallow for those unprepared for the ridiculous aspects that are presented.

Legendary martial artist Little Flying Daggers Li (Ti Lung) has made a decision to return to his home after ten years. By the time he gets there, a few old faces from his past have already come back to give him their two cents about him…including the return of a killer known as the Plum Blossom Bandit. Soon he’s framed for being the killer and will have to solve the mystery of the faceless killer…or end up dead at the hands of those in the martial arts world.

To really understand what is going on during The Sentimental Swordsman, it’s best to keep a pen and piece of paper handy. Like many of Chor Yuen’s other wuxia films of this period, there is a lot of characters and plotting that happens in the brief time of an hour and a half. References to characters and events from decades prior happen regularly (but not shown), the film is keen to introduce one or two characters every ten minutes or so – including the first 15 minutes that has to jam an insane amount of information into that time to get the audience caught up and caring about the story, and it never really stops adding in twists and new plots until the final battle in the last 15 minutes. There is a LOT to digest in this film and that doesn’t even count how many random red herrings that it feels the need to throw at the audience for the sake of keeping the identity and mystery of the plot aloof. Plots including stolen scrolls, a golden vest, poisoning, and assassination attempts all build into the main story about finding the identity of the Plum Blossom Bandit. This rapid fire style of narrative creates a dense film watching experience that almost works better as one thinks about the film after it ends, but as it’s unfolding the experience can be a bit grueling. It doesn’t leave a lot of breathing room for the audience to piece things together or really care about the relationships between characters (the love triangle that should have been key to a lot of the emotional beats feels like an afterthought of the writing) and it ultimately undermines a lot of the better character work and moments that this film is hinged on.

Fortunately, the film has a few things going for it that save it from being a stumbling mess. Director Chor Yuen has a visual flair that works for wuxia films (perhaps setting a standard for years to come) and it’s on full display here. The snowy setting of the film, partnered with some diverse sets, keeps things interesting visually and it really allows the characters to exist in the world. The characters themselves are all a lot of fun, even in their broad stroke writing, and it seems a disservice to limit their screen time at times. In particular, Derek Yee as Ah Fei steals a lot of scenes as does Ku Feng as an overly ambitious social justice seeker. Other characters can feel like they are forced into the plot for the sake of keeping things moving and, in the case of the drunk doctor who has to find an antidote for our hero, some are rather unnecessary. However, those characters are still a lot of fun and it’s entertaining to watch them interact even if the audience could care less about their outcome within the film as a whole.

The Sentimental Swordsman is a bit of a mixed effort overall, being too narratively dense for its own good and losing the balance between story progression, character development, and being an entertaining martial arts film. The fights are entertaining enough with plenty of gimmicks and style to keep the viewer interested, but the rest of the film has a bit of trouble trying to spit out all of the information that’s needed to make it all work. For more casual fans, The Sentimental Swordsman is not necessarily the instant classic it might seem to be. For the wuxia fans or those interested in the style of Chor Yuen, it’s a decent little flick that doesn’t offend in its faults and still retains a fun and entertaining atmosphere.