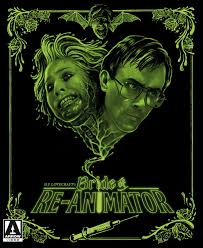 There are no ifs, ands, or buts about it – Re-Animator is a sure fire classic. The film is simply a phenomenal piece of horror cinema from its perfect casting, its pitch black humor, and its weirdly strong criticism of the medical field with its competitive approach. It’s a magical blend of all things awesome from 80s horror and it has a lasting effect even 30 years down the road. So it’s no wonder that the first sequel to such an iconic film would try to recapture the same blend and push it further down the rabbit’s hole of outrageousness. Bride of Re-Animator attempts to do just that, with more mixed results than success, and it comes off as an even loonier cocktail of humor, horror, and insanity. While the film is not nearly as good at pulling it off as the original, it is still an electric ball of energy and one that has fairly earned its own cult following in the years after its release. Enough so that Arrow Video has graciously put together this latest re-release of the film packed with extras and two newly restored high definition versions of both the R-rated and unrated cuts of the film.

Herbert West (Combs) and his buddy Dan (Abbott) have spent time abroad as medics in a warzone perfecting their reanimation process. When things get too heated, they return home to a house connected to a cemetery to continue their work while also working as doctors in a nearby hospital. However, West is not done with his theory about separate body parts all having a connection and he looks to put together a brand new person, piece by piece, and reanimating her.

There are a couple of distinctive differences in Bride of Re-Animator to its predecessor. It’s not nearly as serious in trying to ground itself in any kind of reality. It truly just moves on from where the first film ended: in insanity. Not all of it makes sense and most of the time it doesn’t even attempt to cater to its own logic. The idea of bringing back Dr. Hill is a prime example of this sort of forced hand of recreating the original one’s oddities, but it also allows the film to give him bat wings on his head so he can fly around spouting curses at West, for example. Powered by the kinetic energy of director Brian Yuzna, who seems less concerned with tone like he used in Society and more concerned with going for broke, and the ever charming Jeffrey Combs, it’s hard to deny that the high starting point doesn’t allow the film to go to the next level of weird (just wait until the finale with all of the pieced together abominations nightmarishly crafted by KNB and Screaming Mad George effects groups). In that sense, the film is a success as it further detaches itself from reality for the sake of more fiendish monsters and furthering the outlandish nature of its characters.

The film is also much funnier this time around and it guns for a much more humorous and slapstick style complete with more outrageous experiments and even weirder moments. When you have an entire “catch the hand with the eyeball before the police see it” sequences in the film, you know it’s not going to be nearly as effectively serious. West gets more dialogue jabs in (although calling the decapitated head a ‘no-body’ still remains one of my favorite horror lines) and the character of Dan ceases to be the likable protagonist as he goes full on oddball by the end of the film. This is where Bride struggles the most as it loses that human connection that hooked the audience the first time around. Sure, there is still a new romantic subplot to sort of give two-shits about, but it’s more or less used to further the idea of the creation of a “bride” out of body parts for the finale than it is about creating character depth. The lack of a humanizing character makes the whole film feel a bit more gimmicky (and adding to the humorous element), but it does undermine a lot of the great pieces that kept the original Re-Animator such an iconic staple to this day.

Whether or not the awkward humor and more outrageous horror themed focuses of Bride of Re-Animator float your boat, this latest release is so stacked with special features that any person even remotely interested in the film ought to buy in. Similar to what Arrow Video did for Yuzna’s Society release, Bride of Re-Animator is pack with new interviews, old interviews, commentaries, and both the R-rated and Unrated cuts of the film. The added in footage of gore and more violence in the unrated cut is noticeable with its difference in visual quality, but fans will definitely dig into the work that went into this set as it really creates a robust collector’s item worthy of purchase. Plus, it’s always fun to hear Brian Yuzna talk about his films as he seems to be a very sincere and often fun focused guy about the good (and bad) aspects of his films.

Bride of Re-Animator may not quite touch on the glorious charm and effectiveness of the original Re-Animator, but it’s a fun and energetic film that stands pretty well on its own merit as an entertaining and gloriously gory watch. Cult cinema fans will probably already know whether or not they enjoy this kind of tongue-in-cheek film, but even for those on the fence about it will want to piece together the body scraps of pocket change and purchase this version as it seems to be the definitive collector’s version. As a fan of the film myself prior to this release, I know that I will definitely be revisiting it again and again.