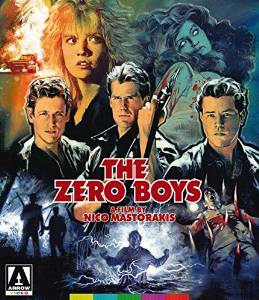 For some odd reason, I seem to be the black sheep when it comes to disliking Nico Mastorakis’ Island of Death. Truthfully, I can’t stand the film and think it’s one of the most overrated exploitation films in existence. Don’t believe me? You can read my review for it over HERE. Because of my general hatred for that film, I have never delved into the director’s other work even when they came with friendly recommendations like The Zero Boys. With the latest Arrow Video release of The Zero Boys though, I found myself willing to try and set aside my bias based on the previously mentioned horror flick and go into it with a clean mind set. While The Zero Boys is hardly a perfect film, it is a massive step up in quality for the director and one that earns some praise for some well shot and executed moments. As a whole the film is horrendously hit or miss, but when it’s good, it’s great and cult cinema fans are going to find a buried treasure of strange with this film.

The Zero Boys are the reigning champs of a survivalist paintball tournament and have been for some time. They train hard to be winners (much to the chagrin of their various significant others). So after their latest win, they decide to celebrate by having an outing in the woods for some rest and relaxation. However, they stumble upon a seemingly abandoned house. Once there, they uncover a vicious scene of torture. Now the owners of the house are mad and it’s going to take all of their training and skills to overcome their stalkers.

The big selling point about The Zero Boys is that the film blends 80s slasher with 80s low budget action flick. As strange as it would sound, it really attempts to pull off this rather intriguing spin. On the whole, the two genres are not as different as they would seem and the general execution of The Zero Boys proves it. The narrative moves with an intent to craft a fun and entertaining film and in that sense it works as The Zero Boys is most certainly as outrageously entertaining B-film. The performances are often silly and over the top, the tone shifts from the action style to the horror feel between the first and second halves, and the film caters to its own oddities which ultimately makes it entertaining. Mastorakis knows how to build a B-movie with this one and he ably slathers the film with some solid atmosphere and then punctuates it with some solid set pieces. The increased budget does the film a lot of favors with some solid special effects and a more charismatic sense of direction from Mastorakis. His use of a steady cam in many scenes, particularly when our heroes and heroines get to the house in the woods, crafts some oddly impressive moments visually (a sense off artfulness that I found void in Island of Death). He even sells some very tense moments including a pit sequence that is shot particularly well despite its puerile set up. In a way, The Zero Boys represents a lot of things that were great about cult cinema in the 80s with its fun demeanor and full grasp of its own reality.

As it was mentioned earlier though, The Zero Boys is rather hit or miss. There are times when the tone shifts and script hinder what might have been a much better film overall. The characters, for the most part, are rarely grounded in reality with off beat romances and their forced dialogue meant to be fun and kitschy. This feeds into the characters’ ridiculously asinine and unrealistic choices/motives to get the plot moving to the next action oriented horror set piece. The idea that the kids even stay at this random house is a throw away motive which is only further complicated by the vague and weird missed chance of building in motives for the killers of the film. There are a lot of interesting ideas at play here, particularly with the torture/traps that the killers have pre-set, but The Zero Boys doesn’t go there since it’s moving too quickly to care about building a solid foundation of storytelling. Hell, the film even explains the existence of machine guns in the film as training tools for the guys when they train for their paintball contests…yeah, because real loaded guns will certainly help them train for paintball battles, not to mention they just happened to bring them with for their little outdoor excursion.

On one hand, The Zero Boys is fun in its own dumb way. It’s ambitious to try and make an action oriented slasher film and Mastorakis has a lot of fun leaping around in his direction. The Arrow Video Blu Ray release of this film only further strengthens it with its new high definition restoration that fans are certain to enjoy. The film is also pretty dumb in its patchy script and unlikable characters which undermines a lot of the fun things that it has going for it in its unique ways. So in the end, it’s hard to recommend this to everyone, but if you feel like you’re interested in it by reading this review or researching the film then you will more than likely love what it has to offer. The Zero Boys is dumb fun in a great 80s way, but it doesn’t quite rise above its own faults.

Written By Matt Reifschneider
Posted by DarkReif at 2:00 PM