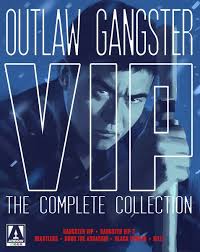 With this review of the sixth Outlaw feature Kill!, I will have finalized the series and it’s easy for me to say that I’m sad it’s done. Particularly because Kill! never has a finality to its tone as it covers another episodic chapter of Goro’s wandering tales of yakuza violence and loss. Like many of the sequels, this one is simply another episode of the series adhering to the formula and relying on the execution of its elements to carry the quality versus a fresh spin or unique story to tell. While the film is not nearly as artistic as the original nor is it as thematically strong in writing as the fourth entry, it is a durable entry that features some of the sturdier dramatic beats and better action set pieces of the series. While it may not have the punch that I would have hoped for the final film of this series, it is still an impressive film to end on and it comes with much appreciation.

Goro (Tetsuya Watari) has just arrived in town and even as he steps off of the train, he’s met with the strong arm of some unknowing yakuza. As it turns out, there has been a shift in power in the local yakuza scene and the tensions between two warring clans is spilling into the streets. One of Goro’s old friends is caught in the middle and his loyalties will be tested, leading our wandering anti-hero back into the storm.

After the rather disconnected and weaker elements of the fifth entry Black Dagger, it’s a relief to know that Kill! returns to a more natural flow with stronger writing and a much more emotionally effective narrative. The formula is still very much the foundation of the film and if you’ve seen the previous entries you can pretty much predict every turn and dynamic that this film is going to throw at you. Conversely, the film is still remarkably effective in its execution. Goro remains his heart strong and knife saavy self, once again played with admirable blends of warm and cold emotions by Watari, and his almost coincidental stumbling into a yakuza turf war plays out in a very smooth manner. The film ably creates strong character interactions between its characters, balancing out its emotional and dramatic moments with an active action sensibility. Director Keiichi Ozawa, who at this point has boiled down the series into a fine art form of visual style, kicks off the film with a slick action set piece and ends the film on a smart finale – throwing back to the original by having the final showdown scored by music from a nearby concert, although this time it’s given a fun Japanese rock band spin that works with the strong visuals. There is also a brief, but ultimately fun action set piece set at a spa/gym that’s worthy of a look for action fans for its unique setting. The key to it all working though is the natural flow of narrative between plot, character build, and action. Kill! just kills it in this regard.

Far be it for me to complain too much about the narrative and plot of this film as Kill! gives us what we expect and it’s done in a way that moves in such a graceful manner, but occasionally the film plays things too concise and too safe. There are a lot of great story and character elements at play in this film and as it progressed I kept thinking to myself that I would have loved for the film to expand on a few of them. The romantic subplot between Watari and Matsubara is built very smartly in the first half of the film, but it’s somewhat dropped in the second half as it focuses more on the yakuza plot development. Another subplot featuring a young yakuza man who owes his life and reputation to Goro tends to be rushed a bit in its wrap up. Now both of these things are generally minor as Kill! moves in ways that make sense, but as a fan I would have loved to see these expanded a bit.

In the end, I’m still sad that this franchise is now done and that it never really wrap up the overall character themes and stories. Luckily, the Outlaw series goes out on a high note with Kill! and really crafts a memorable and entertaining film with just enough emotional punch to remind its audience why this series works so well even at its weakest. Kill! may not be perfect, but it makes what it has feel effective and natural and for a series that has become rather formulaic at this point, it’s hard to ask much more of it. It comes highly recommended.