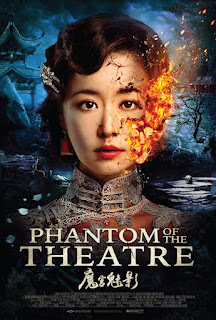 Director Raymond Yip has made his name in the last handful of years with a series of mid-budget horror films that have generated some serious box office bank in China. However, until Phantom of the Theatre, none of his films have made it over to the US for us genre fans. In a way, it created a hype for this film for me, a hype that had almost no basis and little in the way of realistic expectations. All I knew about Phantom of the Theatre was that it was a haunted theater movie directed by a guy who was making a decent sized splash with his last few horror films. It’s unfortunate that I found myself utterly underwhelmed with the film. Perhaps my own hype for the film set me up for failure, as the film itself has some very awesome elements, but it’s also a film that casts aside its horror elements by the second act and loses a lot of the more entertaining pieces in favor of a more dramatic and predictable approach. There are things to like about Phantom of the Theatre, but it also misses out on so many great opportunities.

Wei Bang (Tony Yang) has desperately wanted to get his horror movie made. In the world of 1930s Shanghai though, breaking into the industry is hard and it requires that you know someone. However, Meng Si Fan (Ruby Lin) is a rising actress ready to back his project which will be filmed in an abandoned theater that caught fire 13 years prior. When they start filming however, people start dying and accidents start to happen…could it be the ghosts of an acrobat troupe that died in the theater in that fire?

I really enjoy the first act of Phantom of the Theatre. It’s delightfully over the top, almost invoking a classic William Castle tone of overly serious, but obviously wink-wink attitude towards the material, and I was buying into it. The CGI for the ghosts and the various haunting situations can be hit or miss (as with most films from China), but director Raymond Yip has a sincere knack for visual charm and the practical effects are pretty impressive. There are a handful of ghostly sequences that work, including a dreamy sequence with a mirror and the use of the 'fiery deaths' of some people that enter the theater. Phantom of the Theatre is a visual feast powered by the 1930s period setting, Mario Bava inspired use of sets and color schemes, and some very strong costume design. It has a balanced core of entertaining elements like comedic timing, horrific imagery, and serious story telling intent and I was hooked. Just watch the trailer before and you will see why this film could have been awesome from beginning to end.


From there though, Phantom of the Theatre starts to crumble under its own weight. The film goes for a more epic tone with its narrative, throwing in a handful of twists to the story, and it loses a lot of energy that it had built up in the first 30 to 40 minutes. Many of the funnier, broad stroke secondary characters are cast aside, a few subplots are completely abandoned – like a love triangle between the director character, his lead actress, and his girlfriend whose own doctor plot about investigating the burning deaths at the theater is almost completely forgotten too, and it even throws away the ghostly horror elements in favor of a parallel to the Phantom of the Opera story. At this point, the film also guns for the super melodramatic, adding in new subplots about father/son issues, the sanctity of love, and a revenge twist that drops like a lead weight in the water. The narrative simply becomes too jumbled and it loses a lot of the charm and fun tongue in cheek elements that hooks the audience in the first act. Even the continued strong visual style of the film can’t save it from its own complicated stumbling.

There is a lot still to enjoy in Phantom of the Theatre. There are a handful of strong performances on hand (including a smaller role for Simon Yam who owns every film he shows up in),  the continued inspired visual style of director Raymond Yip, and the first act where the balancing skills of tone and entertainment work to the film’s benefit. Unfortunately, the film can’t keep the energy and narrative moving in the right direction and things get way too jumbled for the film to finish on the high note that it starts on. Fans of cheesier Chinese films will certainly enjoy bits and pieces of what Phantom of the Theatre has to offer, but it’s a rough ride at times. It feels like a film that might earn its cult audience down the road, just on the sheer absurdity of some of its story and visual elements, but for now the film feels a bit like an overhyped and ultimately mediocre horror flick that doesn’t really know how to be a horror flick. I still might go check out Raymond Yip’s previous horror output though based on his visual style alone, so I have to give the Phantom of the Theatre a few props for perking my curiosity.