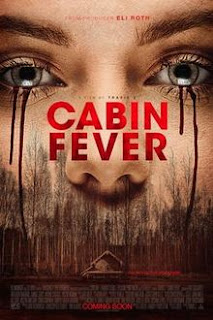 I’ve always tried to make it quite clear that remakes are not inherently evil/bad/dumb/awful. With the proper execution and a fresh voice behind it, remakes can actually be effective new movies that bring classics or overlooked stories to a whole new generation. With that approach in mind, even I had a hard time swallowing the announcement that Cabin Fever was receiving the ol’ remake treatment. The original is only a decade old, the style of horror comedy on display is still a relevant approach (if not more relevant now with the massive amount of successful horror comedies released just last year), and it’s essentially the same generation of people that will be the prime audience for it. There have been a lot of unnecessary remakes released in the last handful of years, like the new Carrie or Let Me In, but this latest Cabin Fever makes them look like glorified, shining gold. Cabin Fever ’16 is simply uninspired and irrelevant for most any horror cinephile. Perhaps if you are part of the 3% of horror fans that didn’t see the original, you might find a fun movie…but that’s really the only way I can see being impressed by this film on almost any level.

A group of college kids decide renting a cabin in the forest is a great way for some rest and relaxation. Strange things are afoot as these young adults out of their element come across crazy local town folk, oddball animals, their own insecurities, and a strange skin affliction to one of their own that has them paranoid and panicked.

The biggest problem that Cabin Fever has right out from the onset is the choice to base this remake on the same script that Eli Roth penned for his original film. That’s right. Damn near the exact same script. Not some of the same scenes, but like the same entire movie. Most of the dialogue is the same, the film adds nothing new when it comes to a new artistic approach, and it doesn’t even attempt to throw in some new elements – outside of changing the gender of the police officer character, which feels like a desperate attempt to add something new for fans to talk about. There are a few smaller details changed here and there, but otherwise it’s the same movie overall. A movie that we’ve already seen. At least other unnecessary remakes tried to add a few new things (modern setting, change of location, new characters and subplots). Cabin Fever just feels lazy.

Worse off, Cabin Fever also has a lot of trouble getting the tone right. Part of the charm of the original is the low budget feel and the over the top horror humor that Eli Roth brought to the table. It’s this approach that made the original the love it or hate it kind of film it was depending on whether or not the immature and outrageous grindhouse style humor worked for you. For me it worked in a kind of early Peter Jackson meets Kevin Smith kind of manner. Director Travis Z however doesn’t quite have the knack of pulling off this tone. The film has a more modern and slick looking production value, giving some of the gore moments a more realistic and mainstream look, but it doesn’t quite have that low budget charm that worked in the original’s favor. This remake also has a weird ability to kill its own jokes and humor on screen with missed timing and lacking atmosphere. Characters seem unjustified in Eli Roth’s off beat dialogue instead of quirky and some of the more shocking moments lack the shock laughs that needed to be there.  It’s just awkward and the film needed to either ditch the humor completely or gone further with it.

On the surface it’s hard to call Cabin Fever a complete train wreck. It has some decent gore effects and the actors seem to do the best with what they have, but the film fails at the basic levels of conception. An Eli Roth script obviously only works with him to handle to the material as a director (depending on your opinion of the film maker even that’s not guaranteed) and the choice to use that script does not do the film any favors as it lacks the style, timing, and low budget charm to pull it off. Considering how open the idea of using the same flesh eating virus of the franchise can be when it comes to crafting a new movie (see the prom teen horror tone of the second film and the Resident Evil inspired conspiracies of the third one), remaking this film was just asinine to begin with – and the actual product does nothing to counteract this poor decision.

If you’ve seen the original Cabin Fever I would suggest skipping out on this remake. If you loved the original film, I would suggest avoiding this at all costs as it lacks any of the elements that made the original one work. On its own it might work with no basis, but never once could I convince myself not to compare the two and that says everything about how little the film marks its own territory.

Written By Matt Reifschneider
Posted by DarkReif at 1:16 PM