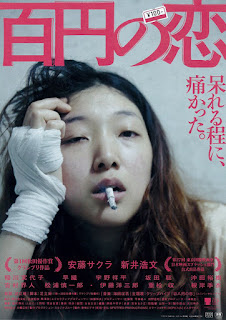 Even though I wouldn't call myself a boxing cinema aficionado, I am very in to, and possibly even a sucker for, boxing films. That doesn't mean I think they are all good. In fact, I am not really a big fan of the Rocky franchise (save the 1st, and Balboa... still meaning to see Creed), but the world of boxing through movies, is something I've always been fascinated by, and very much look forward to diving back into whenever the opportunity presents itself. 100 Yen Love was the opportunity this time around, and I am very glad I took it.

This marks the 2nd boxing picture I've seen hail from Japan, the 1st being Kids Return, but out of the two, and though I find the Kitano picture wonderful (I gave it a 4.5 on this blogspot), I must say I prefer this film just as much, if not more. This time around the lovely Sakura Ando (Love Exposure, 0.5mm) stars as Ichiko; a very sloppy, very down on herself woman in her 30s. She spends her days chain smoking, chugging carbonated drinks, and playing video games all day. She really doesn't care about the world around her, let alone herself.


Without getting into it too much, by way of spoiling things or going too into the details of it, essentially she is very rough on herself as is life around her. She goes through the shitters, for lack of a better term, and while you don't feel sorry for her at 1st, you see her go through a lot of things that quickly gets you on her side. She is not a bad person by any stretch of the imagination, she just lacks anything to fight for... okay, I'll keep the boxing puns to a bare minimum.

The characters that surround her a very eccentric (not in an over the top Kamikaze Girls kind of way), but they each have their own quirks and traits and are all very memorable, even the more throw away characters, long after the credits roll. I was hoping it wouldn't be a case of just liking Ichiko, and no one else around her, but that wasn't the case.

It's a boxing film, so what about the boxing huh? Well, honestly there isn't much of it. I won't get into things, but I will say the actual sport of boxing (at least the competitive aspect) isn't really here, and trust me, it totally works. You never get her rising to fame and beating infinite opponents with ease. Again, I won't elaborate, but I think the writer and director took this in a much smarter, more realistic direction, and it brings a more raw experience out of it.

There is an odd tone and feel with the humor, but it really works here. There aren't really many laugh out loud moments, and things get really dark in some spots (I wasn't expecting it honestly), but it never feels forced or manipulative, and that I really respect. Everything is handled very well, and the film, in terms of the story direction, writing, and performances, never falters. If I had to make one complaint, without again, spoiling anything, it would be that there was a line from the sister character towards the end during the boxing match that in my head I was hoping something like that wouldn't happen, but it did, and sort of put a bitter taste in mouth, but it is forgiven in the end.

When it comes to the technical aspect, I thought everything was fine. The framing was nice, the handheld work... worked, although... there is one shot where she was on a bicycle at the very beginning that was dreadfully shot... but whatever. I really liked the music throughout. A very interesting use of a harmonica is played throughout and adds a unique flavor everything. The more sappy orchestral score works here too, and by works, I mean I honestly hardly noticed it until I purposely thought about it.

I could go on and on and on about how much I liked this, but I won't. Finally, I want to give praise real quick to Ando's performance, both emotionally and physically (she seemed to gain a lot of weight initially and shed it all off after boxing becomes her life in the film). She absolutely nailed it, and I thought she could've been nominated for her acting in Japan; if she didn't get a nomination that year, I'd be very surprised. It was so raw and real. Very fearless but also poignant work from her. Her character was very complex, but she kept her grounded and real, but most importantly, relatable, and a round of applause is in order for this stunning performance.

Even if you have no interest in boxing films, I still think this is worth seeing. The characters and the themes and philosophy behind everything really struck me hard, and intensely so. It's an entertaining movie, hits you in the feels when necessary, and ultimately makes you feel this sense of a fighting spirit within yourself. I think this a good film to get your spirits alive and burning. Always keep fighting on, no matter the outcome. This film is a knockout (sorry...)!!!