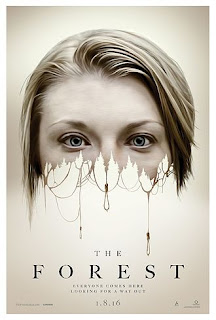 With a generic title like The Forest and some underwhelming trailers, I just went ahead and decided to skip seeing this little haunted forest flick in theaters. Even when it dropped on VOD, I was hesitant to use my credits to watch the film. However, impulsive renting certainly got the better of me and I decided to give The Forest a chance. Like its underwhelming title, the film is also quite underwhelming. The Forest is one of those films that has a rather intriguing basis and it’s far from being bad in many regards as it passes by with enough atmosphere, scares, and ideas to keep one watching at least. However, it succumbs to one of horror’s worst enemies. It plays it safe. Ultimately, it’s a move that undercuts what might have been a fun and creepy flick.

Sara (Dormer) just knows her twin sister Jess (also Dormer) has had something bad happen to her. It’s that twin connection, you know? With a bit of investigation she finds out that Jess has disappeared into the Suicide Forest in Japan, a place where few people emerge alive when lost. She decides it’s up to her to find out what happened and she heads into the dreaded (perhaps haunted?) forest to find out what happened.

Perhaps the biggest surprise (and subsequently, biggest letdown) is the interesting J-Horror aspect that The Forest has going for it. While the J-Horror trend reached a breaking point in the early 00s that spurred a slew of horrendous American remakes of legitimately scary flicks from various Asian countries, it has since subsided into being something that not doesn’t have a lot of power here in the US – even if the stylish ghost stories continue to pop up Japan. So to see an American film (and not one that’s a remake) use elements of the J-Horror genre in 2016 came as something of a surprise. The Japanese setting of the film helps, but the focus on atmosphere and vague plotting, including the style of blurring the supernatural with the real when the characters finally enter the forest itself is something that I massively respect and it’s a chancy maneuver that I appreciate from the film makers. However, in that vein, The Forest lacks a lot of style and edge to pull off the J-Horror tone. Instead of running with its own concept, it downplays the blurred reality of the forest for a more grounded tone and as the film moves on into the final act it massively misses out on maximizing the confusion of its lead character and the claustrophobia of a dense suffocating forest. The ideas are there including the somewhat gimmicky use of twins, angry ghosts, and the weird cohesion of time and space that the film attempts to give the latter half depth…but it never seems to go far enough with any of them to remain memorable.


Execution wise, The Forest looks top notch. Director Jason Zada has a knack for muting the colors of the film without sapping the energy of the visuals (the blacks are super black in the night scenes and it creates a nice disorienting tone) and the production values are pretty impressive. There are times when the cast feels a bit misplaced, including Natalie Dormer as the lead Sara who lacks a lot of charm and dynamics for the scary stuff to seem all that scary, and the film should have taken a bit more time developing the “guide” for the forest expedition as he was perhaps the most interesting character that doesn’t get nearly enough screen time. The scares can be a bit predictable at times, if not forcefully jammed into the film when it comes to the childhood toy that Sara finds in a hole or eye rolling as Sara becomes paranoid of a journalist that she tags along with, but it’s commendable for its atmospheric tone that is used to give those moments meaning even if the jump scares seem formulaic.

With the J-Horror inspired idea and some of the more fascinating blurred reality aspects that pop up in the third act (the ghosts don’t really show up until an hour into the film, for those wondering), there is definitely potential in The Forest to have been a nice rekindling of the now overlooked genre. However, The Forest lacks a definite sense of urgency and it fails to really add style to its horror set pieces. As I said above, the film simply plays it safe and it’s the Achilles Heel that takes it down a few notches. It is not a film that will be remembered as being terrible, but it might run the risk of not being remembered at all.