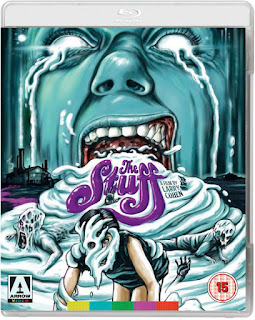 When it comes to horror comedies there is a lot to be learned from a film like The Stuff. Particularly because this 80s satirical science fiction horror romp is about as eclectic as they get, scattered in its narrative, and often too quirky for its own good. However, every time I watch the film I am immediately caught up in it as it bounds with an energy and an excitement to its own beat with its fiercely awkward mannerisms. This is a film that is so confident in its own oddities that one cannot help but be swept up in the windstorm of its charm and its strange ability to be so significantly entertaining with its commentaries. Sure, on paper The Stuff is not nearly the perfect film and many times it specifically spins away from following the straight line of narrative. This is why The Stuff is brilliant. This is why enough is never enough. This is why I can’t get enough of The Stuff.

The Stuff. It’s America’s newest food trend. It’s delicious, nutritious and ultimately suspicious. That’s why the other ice cream and confectionary companies have hired Moe (Moriarty) to do his under the table investigation of the brand. With the help of one of The Stuff’s advertising heads (Marcovicci) and a young man determined to prove that The Stuff is killing his family, they will uncover the greatest conspiracy the world has ever known.

The Stuff is one of those movies that increases in potency with time. Its 80s anti-corporate, anti-consumerist stand might seem very 80s at times, but really the film is much smarter than it would seem on the outside. The satire is potent, and similar to The Stuff in the movie, it’s packaged in a slick and very consumable manner so that the themes and scathing social commentary go down with a laugh (and perhaps a couple gags). This is the style that Larry Cohen has always worked into his movies, a depth that works the longer you think about it, and The Stuff might be one of his most effective films at making it work. In its own tongue-in-cheek manner, The Stuff is a film that works on levels that it shouldn’t and it uses its fun and often wink-wink attitude to do so. The commercials, the jingles, the over-the-top approach to its Invasion of the Body Snatchers elements and conspiracy theories is just enough jab and tickle that it lasts well past the decade of its creation and rings true to this day. In this sense, The Stuff might be one of the most effective horror films of the 80s.

Once you take that social commentary and satirical depth out, The Stuff is a little more hit and miss. As I mentioned in the introduction of this review, the film is scattered and often eclectic in how it goes about telling its tale of mind altering, body consuming white goo. The plot seemingly leaps from subplot to subplot (all within the good lens of building a larger conspiracy on hand) and it will shift gears rapidly. Characters pop in and out. Chocolate Chip Charlie shows up at one point and it makes us think that the film is going to go the way of being a buddy film, but then sends him on his way randomly. Hell, the final act adds in a strange private military swing that comes out of nowhere. Characters also make odd decisions and the inclusion of the young man and his family converges with the conspiracy side in the most forced way possible. However, The Stuff pulls off a magical thing when it comes to its flaws. It makes you believe that, whether they are or not, the flaws feel like they are done on purpose. The film is littered with random characters, but they are all fun and kitschy. The plot will jack knife in some odd directions, but it’s a film about white goo that makes people into zombie like things which characters refer to as Stuffies so really is it that odd? That’s why The Stuff is brilliant. It uses its humor and satire to power through even the strangest of narrative spins and plot devices to create a very unique cinematic experience.

The Stuff certainly has its fan base, as is the case with most of what Arrow Video releases, but this is the kind of film that should have a grand nostalgic following like the Ghostbuster films or The Goonies from the 80s. It’s way smarter than it ever should have been, it’s a riot to watch repeatedly, and 30 years down the road it’s still a relevant satire worthy of owning, quoting, and praising by cinephiles…cult or not. As the catch phrase for the product in the film goes, enough is never enough. And I simply can’t get enough of The Stuff.