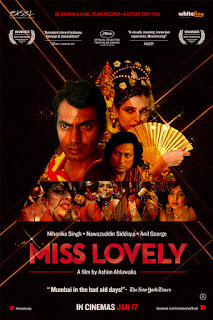 The Duggal brothers produce very sleazy sexploitation during the 1980s in Bombay. The older brother, Vicky, played fiendishly by Anil George, has run into some trouble with a distributor and his relationship with his partner in the biz, and his younger brother, Sonu, played to chilling perfection by Nawazuddin Siddiqui (Gangs of Wasseypur), quickly becomes chaotic and destructive. The two sell their brotherliness quite well, and when things quickly become fractured between them, they keep it believable and intense the entire time.

Honestly, there isn't a whole lot going on by way of a plot. You have the downfall between the two brothers, and Sonu, who is our main character, falling for a woman named Pinky (Singh), whom he tries to dupe (in a sense) and drag into their dark world of sex cinema, though he does seem to genuinely care about her, and the dynamic relationship between the two folds out quite well as the film progresses, for better or for worse.

As rooted as it is in its own C-grade cinema world it creates (the visuals, to the recreation of said film segments, to costume, music, etc.), the film plays out very much so like a slow-moving and almost tedious arthouse film, though I personally never found the film to drag too much. I was very much absorbed into the world presented to me (despite breaks forced on me outside of the film's control), and found the colorful array of characters equally interesting and repulsive.

There isn't really any good people in this movie per se, but given the stellar performances all around, you find yourself sort of entranced by what is going on around them, even if it isn't very eventful, by of set pieces or the like, commonly associated with most of Indian cinema. There aren't any song and dance numbers here, save for one or two that is actually going on in their world, but nothing fourth wall breaking and cringe inducing here. Just a pure character driven piece.

I really haven't seen many Indian films, though I am slowly changing that, but one thing that stuck out to me here, is the music. Score and song is a huge part of the whole Bollywood spiel, but it has always bothered and taken me out of everything, especially that forth wall I mentioned. Can't stand it. Here there is none of that, whatsoever, there is nice music, but it isn't really in your face and distracting, and that I must praise. Loud is fine, if necessary and complimentary to the work, but in most cases it isn't (though not Indian, the obnoxious scores of Hans Zimmer, mainly of his Batman scores, comes to mind).

I praised the performances earlier, with the real standouts being the two brothers. Vicky is cold, and sort of on the brink of destruction, though he tries to keep his cool. He does whatever it takes to progress he and his little brother, though he really only cares about himself. Sonu (again, Nawazuddin is genius!!!) on the other hand is more emotionally invested in people, though he keeps trying to distance himself further and further from his job, he is pulled back in, almost uncontrollably. He has the best arc and his final scenes gave me chills more so than any other film I can think of in recent memory. I was so impressed by his final acting bit, I rewound it and gave it another go. Round of applause!

This film was released back in 2012, and didn't get a botched theatrical release in India until 2014, and here this year ('16) I am finally getting to see it thanks to an English friendly blu-ray release in Germany. It wasn't a film I was really aware of until said release, but I am very thankful to see it, and even more so to know that this release may be the chance of a gem getting to the audience it deserves. If works like this continue to rise and blossom in India, we may just be looking at another country's golden age of cinema, and that is something I highly look forward to!