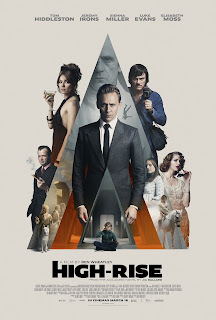 I've been a big fan of Mr. Ben Wheatley for quite some time now. The 1st film I saw of his was Kill List. Love that one! Went back and watched Down Terrace. Quite like that one! Sightseers came out, fell in love with it as well, and the same could be said for A Field in England, which some people tend to take way too serious for some reason.

He got four films out in a span of just a handful of years and shot to fame and became one of the most well-known modern directors of the UK, alongside likes of someone like Edgar Wright. So Wheatley finds himself with his biggest budget yet, and makes what we have here, High-Rise.

I think without a doubt this is his most ambitious project to date. It's based off a J.G Ballard novel of the same name, which sadly I have yet to read (but may now after having seen this), which is a novel that has seen nothing but praise since its release in the mid 70s. So, getting that out of the way, I can't do the whole 'the book is so much better!' thing that everyone throws at every novel based film.

The film is quite good, but it does have its fair share of problems. I will focus on what I liked 1st, and avoid spoilers and all that jazz, as there is a lot going on here. Right from the get go, the film is very visually appealing to look at. I would say this is go-to cinematographer, Laurie Rose's, nicest looking effort with Wheatley.

The sense of scale of the building is ridiculous and you feel like you are really in this gargantuan beast of a concrete world. The camera floats around with plenty of steady rig shots, alongside your typical handheld affair, but there are some absolutely gorgeous extreme close-ups scattered throughout, sort of echoing and perhaps using the same custom lenses the crew previously toyed with on A Field in England. So, in terms of the visuals, there are no complaints really.

In terms of the acting, everything is great, though over the top quite often, but intentionally so, as the characters are all freaking insane in their own ways. I think the standout performance goes to Luke Evans, who sort of plays the asshole neighbor, but has quite the arc throughout, and sort of kept me interested in everything that was going on. His sideburns alone earn a nod from me!

I think my real problem with the film is the pacing and how quickly things move along. It's sort of starts like a visual brochure for this 'high rise' structure all of the residents are staying in, with Dr. Laing, Hiddleston's character, coming into during the early parts of the film. Anyway, you sort of get to know the class structure, the rich on the top floors, the poor on the bottom, but there isn't really much focus on the lower classes at all, nor does there ever really feel like too much division between the middle and upper classes, save for things like ridiculous costumes, and a horse.

The film reminded me a great deal of Bong Joon-ho's Snowpiercer, which is also based on a novel, albeit a visual one. I much prefer that film over this, and couldn't help but find myself getting called back to it throughout. I like a film with nasty characters that you don't really like, but this one just fell like hollow caricatures of real people, and I just kept not caring with what was happening.

Everything moves at such a rapid pace, trying to condense what I am assuming is this massive book, into a 2 hour film. Everything just tends to happen seemingly out of nowhere. The build up isn't really a build up. It's just like one second things are fine and the next they are chaos, but you never really feel anything, and maybe that's the point, but it just didn't work for me much.

At the end of the day, I think this may be my least favorite Wheatley film, though I did like it, I just didn't love it. I could go on and on about this and that, but this review would be way too long, and I wouldn't want to dump that on anybody. I've rambled long enough. I'd say give it a go if you are interested. It's visually pleasing, so there is that. I think lots of things work in here, and lots of things don't. It's a lovely mess!