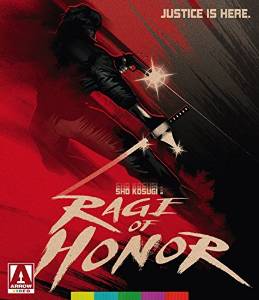 Every time I watch a Sho Kosugi movie, I’m saddened that his career as a leading man in action films wasn’t a longer one. Take Rage of Honor as a prime example, which is getting the deluxe re-release Blu Ray treatment from Arrow Video. Rage of Honor is not a great film, nor is Mr. Kosugi a phenomenal actor that can carry it. Far from it. However, this film is so completely, utterly, and undeniably entertaining that there almost had to be a bet somewhere in how much ridiculous action they were trying to fit into it. It’s non-stop. The action never ends and Sho Kosugi carries it with his stabbing stare and outrageous fight work. It’s amazing to think that in the grander spectrum of silly 80s action movies that Rage of Honor isn’t a top contender for “Most Action Set Pieces Forced Into One Movie” award. Needless to say, I was hooked and loved every minute of it.

Shiro (Kosugi) is a top notch detective working on a big drug smuggling case that connects Pheonix to Buenos Aires. When his partner is killed by a vicious killer in the drug mob (Van Bergen), Shiro must head down to South America to bring his brand of outrageous ninja ass kicking to those who betrayed his partner.

There is no plot to Rage of Honor. Okay, so maybe there is a little bit of plot to get the movie rolling. Think of it as a sort of loosely tossed together rejected Miami Vice script. Sho Kosugi plays a cop who doesn’t play by the rules (so 80s!) and he seemingly has magical ninja skills that are never explained. His partner gets killed (action movie clichés will do that to them) and he has to go to some exotic locale to find his killer and keep his honor…or something. There is, of course, some crooked cops involved, ninjas, and big explosions. This wouldn’t be a late 80s action movie without those. Really, there isn’t much of a script here. Hell, there’s barely any characters outside of the caricatures that some actors play to get the film from one action scene to the next. Kosugi’s Shiro has almost no personality, his romantic relationship (which gets her kidnapped – also so 80s!) is about a thin as deli meat, and the various connections of baddies n’ cops simply exist to keep the plot moving…what little there is. Truthfully, for those who want a well-developed story and characters, you should probably look elsewhere because Rage of Honor does not have time for things that are not getting it from one action sequence to the next.

But, boy oh boy, this film is a lot of action. About half way through the film, I kept wondering to myself if this film was trying to break some kind of record to get as many action set pieces in it as possible. By the time the sudden credits roll (without any kind of wrap up, mind you), I was positive that director Gordon Hessler, Sho Kosugi, and the writers must have some sort of bet on how many set pieces they could stuff into it. Rage of Honor has it all. Boat chases, explosions, ninja fights, sword fights, fist fights, James Bond inspired espionage that has Kosugi in a tux flipping around and blasting guys, fist fights in a river, a jungle tribe trying to kill our hero with spears and arrows, more explosions, exploding grenade throwing star weapons, jail breaks, and ninjas in camo gear with rocket launchers, flame throwers, and giant claws that fly around in a helicopter. The film even keeps the setting varied: empty warehouses, full warehouses, jails, a ship graveyard, jungles, villages, a boat, and a hotel room. It’s like the makers of Rage of Honor saw every action film in the previous 5 years and tried to pull elements out of each one for this. It’s fuckin’ jam packed.

Unfortunately, Rage of Honor has to sacrifice plot and characters to fit so much awesome action in, but after watching the movie I think the sacrifice was worth it. The film may not be "good," but it sure is really, really entertaining for B-action movie fans. This release is the new sharp looking high definition transfer from MGM and includes new interviews on the release with one with Sho Kosugi about his career and a little history lesson about the rise of ninjas in cinema during the late 70s and 80s. The film, however, is so entertaining that if this release didn’t have any special features it would be worth the purchase. The rest is icing on the cake. Rage of Honor is a film for those who like the cheesy, action oriented focus of the 80s and while it won’t appeal to everyone, it gets a huge recommendation from me. Nothing is as awesome as non-stop action powered by Sho Kosugi.