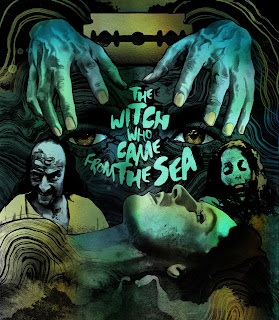 The first two films I watched in Arrow Video’s American Horror Project box set showcased two ends of the artistic horror spectrum. One end was in the gory absurd (Malatesta’s Carnival of Blood) and the other in the thoughtful atmosphere (The Premonition). The third film, The Witch Who Came from the Sea, rests right between the two as a mixture of style. It’s a rather unnerving and creepy film that focuses on crafting a character study for a young woman dealing with trauma in some very unique (and violent) ways. The blend of horror pre-slasher elements with artful character dialogue and atmospheric build makes it the pearl of this set and it’s a film that is likely to leave a lingering mark long after it has finished with its themes and momentary flashes of brilliance.

Molly (Perkins) has really worked to be a great woman. She holds her own job as a waitress in local bar in the seaside town she lives in and she is very concerned about the well-being of her two nephews. Molly isn’t right in the head though. Her childhood has left her scarred and things are starting to come to a head…and the men around her are the ones that are going to pay for her pain.

The Witch Who Came from the Sea is the kind of film that you can study. In many ways, it’s a hard film to stomach though with its themes and narrative. The story of a woman traumatized as a child, which is told in a series of reoccurring flashbacks with an almost deafening silence to go with them, is one that the audience suffers a bit of heartbreak from, but as the film plays on we are almost terrorized to see her spiral out of control and become something of a monster herself despite her honesty and best intentions. This sort of narrative, partnered with an exceptional performance from Perkins as Molly, really makes The Witch an artful experience for a character study film that certainly laid the groundwork for modern classics like American Psycho and the like. Her spiral leads to some gruesome and overtly sexual deaths and some disturbing moments of visual film making that give the film those sort of pre-slasher pieces, but it’s her ‘lost at sea’ hopeful vision of her own future and the way that the film handles it that really makes this film so horrific…because we see this woman who wants the best, but keeps finding herself a victim of her own mental disturbances. It’s heartbreaking how The Witch Who Came from the Sea handles this blurring of reality.

The film is successful at telling this character’s story for a variety of reasons. As mentioned, Perkins gives a phenomenal performance in the lead, but she’s surrounded by some very talented secondary casting and a director who knows has to balance the dramatic beats with the horror elements in an almost perfect unison. Just seeing Chapman's performance as Molly's lover Long John and how much he cares for her makes the proceedings even more impactful, as a perfect example. The film also partners a longing and subtle score with contrasting visuals that lean from the pre-slasher horror kill sequences to an almost dream like quality of her time on the beach with her nephews. Simply put, this film understands that it’s walking a fine line on some very controversial topics and it does it with remarkable ease, shifting this way and that with its visuals, performances, and tone to get a lot of emotional punch out of each moment.

Truly, The Witch Who Came from the Sea is the biggest surprise of the lot in this first volume of American Horror Project. While the film is notorious for making the list as a “video nasty” back in the day, this is the kind of thoughtful and artsy horror that makes the genre such a unique and fascinating one to study as it touches on both the darkest and brightest elements of the human condition. Kudos to Arrow Video for bringing this film out to a bigger audience as I feel this is the kind of film that ought to be seen more by horror and cinema aficionados all around. It’s simply that effective.

Written By Matt Reifschneider
Posted by DarkReif at 9:53 AM