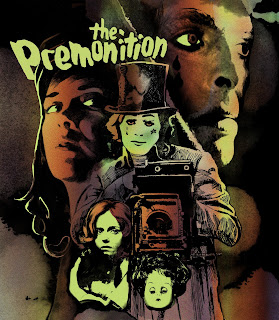 Going into the second of the three films included in the American Horror Project Vol. 1 set from Arrow Video and I’m already seeing the massive diversity that this series is going to bring to the table. While the first film I reviewed, Malatesta’s Carnival of Blood (see the review HERE), was obvious in its cult appeal, The Premonition would indicate a cult appeal in a very different way. Instead of a gory and edgy horror flick, this little film is more about crafting an artful tone and ambiance than being a straight up horror tale. At times The Premonition bounds between being a drama, a crime thriller, and a supernatural horror film and it makes for a rather intriguing and layered film experience. While the mixture might not always settle together perfectly, the execution of the film seems to be of a much higher caliber than I expected going in – leaving it to be a rather fun surprise.

Andrea (Barber) has just been released from the mental ward and, naturally, she wants to see her daughter Janie (Brisebois) who was taken away when she was institutionalized. It just so happens that her friend Jude (Lynch), a clown at a local fair, has taken Janie’s picture and together they plan to kidnap the girl from her adopted home. However, her adopted mother (Farrell) has been having visions lately…visions of the two kidnappers to be…

The Premonition rests on the more cerebral spectrum of horror films that were coming out in the 1970s. Sure, the invention of the slasher was starting to rise up as the mainstay of scares and screams, but The Premonition does not seem concerned with following that pattern. In fact, the film tends to shy away from many of its horror elements instead of capitalizing on them. It focuses on creating much deeper characters and themes for it to pull its energy from. There are a few ‘visions’ that have a nice horror tinge to them (a scene where Andrea shows up in a vision to the adopted mother particularly sticks out as effective), but truly this film rests more as a dramatic thriller than anything else. As was mentioned above, the film also tries to blend a few different genres together and the artfulness of that intent very much comes forward as the film plays on. The look of the film is strong, especially in the new 2K hi definition format on this latest release from Arrow, and the acting is impressively subtle which really lends itself to the heartbreaking flaws of the characters. In many ways, The Premonition does not feel like the low budget independent film it is and it might have fit in with some of the impressive studio horror efforts of the 70s with its quality. If anything, it gets massive respect for that.

However, The Premonition also suffers from a few flaws due to its concept. At the core of the film, there is this idea about parapsychology where one of the doctors continually tries to explain how everything in the world is connected. The film tries to replicate this in the narrative by not only having one of the characters have visions that seem to dictate events, but it tries to play around with the idea that nothing is a coincidence. That everything happens for a reason. While this seems to be a fairly interesting theme that runs throughout the film, it also seems to be a very easy cop out for some of the major plot conveniences that keep the story moving forward. A few pieces that seem convenient could work, sure, like how Jude conveniently finds Janie by photographing her at the fair or even the weird use of the music that connects things in the finale, but too often it’s used for everything as explanation. Half of the time characters seem unaware of the connections and don't ask 'why' as the film seems content at just letting it happen versus using it as a true driving force of the narrative thematically. So the audience is just left assuming that it’s this force of connection that makes these random convenient choices and moments. I love the idea, but it seems almost too lackadaisical in its use to be truly as impactful as it might have.

If you like your horror movies with depth, littered with intriguing characters, and executed with a strong sense of dramatic tension, then The Premonition is going to be right up your sleeve. The themes tend to be a bit too wishy washy for my tastes as I was hoping for a bit more punch to the ideas at work in the film, but for those who like to take the time to tease and ponder on the smaller details then this film gets a huge recommendation. It helps that this release of the film also comes with a very insightful article about its themes and a documentary that digs into the themes of the film more than the film does itself, so if you’re interested – then this is the way to see it.