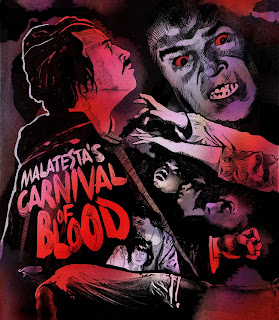 “I don’t understand anything that’s going on around here, Kit. I feel like a fly caught in a spider’s web. I keep looking for the spider, searching for him before it’s too late.”

The above quote is from some of the dialogue that pops up in Malatesta’s Carnival of Blood and I’m not sure there is any moment in the film where the audience truly connects more with our protagonists then when this statement is uttered. Even before the movie started, Arrow Video felt inclined to include a little introduction by Stephen Thrower who, essentially, warns the viewers that the following movie is going to be hard to digest and it’s one that needs a certain mindset to be enjoyed…even for cult horror fans. He’s certainly not wrong as the following film was indeed, a bit hard to digest. Malatesta’s Carnival of Blood is a testament to the creative will power of the low budget horror films of the 1970s (something I’m sure I’ll repeat as I continue to dig into the first volume of American Horror Project) that earns its merits by being more creatively insane than really a well-made film. Like Mr. Thrower prepares you for, if you go in with the right mindset it’s a delightful little horror gem, but if you do not…prepare to be devoured by the spider hiding in the room.

For the Norris family, Malatesta’s carnival allows them to work and raise their young daughter Vena (Carazo) in the same place. As they quickly learn though, in the few days leading up until the carnival opens, that this place is not nearly as fun as it would seem…and there are more sinister creatures and forces afoot that want them there for a different reason.

Never, ever does Malatesta’s Carnival of Blood indicate to its audience that there is going to be a cohesive plot. Right from the opening shot of a swirling table where our leading young lady Vena is being told her fortune, this film says to the audience: hold on, this is going to be one weird ride. And outside of perhaps the first 15 minutes where the film lays out its basic character roles and foundations, it never leaves the sort of surrealism that haunts the rest of the film. The lacking narrative and cohesive nature to its structure is perhaps the hardest thing to swallow about the film (not that it doesn’t try to throw in some random things like vampires into the mix to keep the audience off kilter) and the psychedelic nature of the proceedings is automatically going to make Blood the kind of film that garners a love it or hate it audience relationship. If anything, the smartest way to approach the film is to simply sit back and embrace the visual stimuli and the nightmarish tone because when you start asking yourself 'why' then the entire film loses its grip and comes crumbling apart.

Outside of its stylistic approach to its nightmarish decent into carnival hell that features stabbing score cues and odd lighting effects, Malatesta’s Carnival of Blood earns some credit when it comes to seemingly crafting a horror drug trip with what looks like no budget. The acting is surprisingly solid, although the surrealistic tone makes ‘good and bad’ acting almost irrelevant as it plays into the atmosphere, and the special effects are impressive too. A sort of odd story about cannibal workers (they kind of seem zombie-ish on the surface without the explanation) allows the film to add in some gore pieces for shits and giggles and the funhouse nightmare of the entirety of the third act makes the film certainly feel unique – which is always a welcome aspect for the horror fan who has seen a lot of weird stuff. If anything, there is a charm to it's low budget craftiness.

While the film is hardly perfect and it will certainly pull itself into the love it or hate it caste system of horror fans, Malatesta’s Carnival of Blood is impressive in a lot of its B-horror charming ways. It pushes through on sheer will power, visual style, and its own odd approach to narrative with plot holes, characters, or classical storytelling formulas damned if they get in the film’s way. While this is not a film for everyone, those who are digging into the robust American Horror Project Vol. 1 set are going to know already if they will have the mental power to just run with the film. For those looking for a rather unique and inspired low budget 70s horror flick...then this is just the place to start.