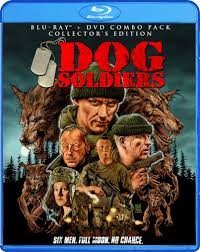 While Neil Marshall might have crafted a horror household name for himself with his deliriously effective monsters-in-a-cave film The Descent, his career started with the just as effective – if not more fun – werewolves vs. soldiers film, Dog Soldiers. With the recent Scream Factory re-release of the film on Blu Ray, it was high time that this cult film get a review here on Blood Brothers and what better time of the year to do so than now. For those of you that have seen it, this review hopefully just reaffirms your already undying love for the low budget action oriented horror flick. For those who haven’t seen it, hopefully this review convinces you to go out and immediately purchase it. Dog Soldiers is a lean and mean flick that takes the best elements of the original Assault on Precinct 13 and slams it together with the darkly comical werewolf hijinks of Silver Bullet.

It was supposed to be a routine exercise for a small squad of soldiers in the forests around the UK. Unfortunately, things don’t quite go nearly as smooth as expected when they stumble across another squad of soldiers slaughtered and missing. The one survivor of the group (Cunningham) tells them about the monsters that attacked them and the group quickly seeks shelter in a small house. With the help of a local researcher (Cleasby), they will have to use their wits, weapons, and will power to survive the oncoming siege.

Neil Marshall is, quite frankly, a badass. Werewolf films are not only ambitious to pull off, but usually pretty costly. Dog Soldiers is a film that plays its constraints to its benefit, utilizing its low budget to be creative with its narrative and taking an action packed route to spin the classic werewolf tale into one that profits from its modern setting. While the film is still heavily rooted in its horror foundations with some solid jump scares, creepy atmosphere (that moment when the werewolf slowly climbs in the upstairs window…), and its fair share of tension, it also takes a remarkably fun action path with it. I mean, it’s fuckin’ soldiers fighting werewolves. If Marshall didn’t at least attempt this, I would have been disappointed. There is plenty of chase sequences, including one that has them going through walls and floors to escape the claws and teeth of their pursuers, and there is quite a bit of gun work and even explosions to keep it entertaining. With the blend of ‘hold the fort’ action and traditional horror moments, Dog Soldiers moves at a wicked rapid pace that mixes the entertainment with the thoughtful execution in all of the best ways.


Even outside of its commendably entertaining aspects, the film earns a lot of merit with interesting and well developed characters. Our soldiers are delightfully rough around the edges are people, but their continued loyalty and dedication to survival makes them sympathetic to the cause. The occasional twists that are thrown into the plot, an asshole commander from another group or the scientist that they stumble across in their retreat, only help to deepen the audience’s interest in their well-being. Partner this with the exceptional special effects – I don’t think werewolves have looked this good in any movie since this one was released – and Dog Soldiers just continues to impress.

One of the biggest complaints about the film is the actual film look and quality of the film. Even on the latest Scream Factory Blu Ray release, the film is grainy and looks like it might have been filed in the 70s versus the 00s. There are a variety of reasons for this, including a lack of the original negative and how the film was shot when it was being made, but I find the look and tone of the older grainy feel only adds to the atmosphere of the film. Perhaps it’s just because Dog Soldiers is so damn good that it makes what might have been a detriment feel intentional, but the look of the film really does add to the Assault on Precinct 13 feel.

While The Descent will most likely remain Neil Marshall’s horror classic for the rest of time, it’s hard not to have an undying love for Dog Soldiers. Sure, it can be a little rough with its abrasive characters and occasional low budget looks, but the film itself is a deliriously entertaining romp through two genres worth of material. All in all, it’s simply a fucking blast to watch and one that comes with our highest of recommendations.

Written By Matt Reifschneider
Posted by DarkReif at 6:49 PM